One of the best Ayurvedic doctors in Chandigarh North India who has experience of years in serving people through herbs.

Dr. Madan Gulati a well-known Ayurvedic doctor having more than 40 years of experience. Dr. Gulati runs his own ayurvedic clinic where he serves the people herbs. He is an internationally renowned Doctor in the field of Ayurveda. Dr. Madan Gulati is not very much net savvy but due to his abilities, experience and knowledge in handling and managing the complicated diseases, he is always with us for the guidance in every typical cases.

Videos of Dr. Madan Gulati During an Event of Ayurvedic Consultations in Slovakia, Europe

Information by Dr. Madan Gulati on Curcumin and Boswellia

Videos of Dr. Madan Gulati During an Event of Ayurvedic Consultations in Latvia, Europe

Video of Dr. Madan Gulati during an event of Ayurvedic Consultations in Macedonia, Europe

What is Disease, According to Ayurveda?

Who is Healthy, According to Ayurveda?

Running his own Ayurvedic treatment center in Chandigarh, North India. The patients visit him for the consultation from all over world to his clinic located in most beautiful area of Chandigarh.

The patients who are suffering with complicated disease and are not getting relief from any other doctor but is getting good results after and relief. By taking the ayurvedic treatment from Dr. Gulati. - (Comments Written by Dr. Vikram Chauhan)...

B.A.M.S. (Gold Medalist, 1st in the University), M.D.(Ayurveda), Diploma in Panchkarma and Yoga

Vaidya Shiromani Award for Exemplary services in the field of Ayurveda by Advisor, Department of AYUSH, Govt. of India.

Experience as an Ayurvedic Physician:-

Dr. Madan Gulati conducting a workshop on uses of medicinal plants. The listeners are doctors from NHS (UK) 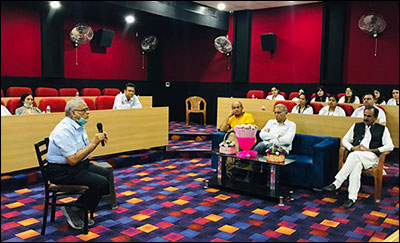 Dr. Madan Gulati enlightened the Ayurvedic Doctors in the Faculty of Shuddhi Ayurveda Panchkarma Centre, Dera Bassi, about need and Importance of Ayurvedic System of Medicine in the present scenario on 4th July, 2021

Actively Participated with an enlightening speech on "Bringing Health with Herbal" and "Introducing Ayurveda in School Education" to explore the scope from the basic levels of Generations, in State Level Seminar on Medicinal Plants & Herbal Gardens, held on 12th March, 2021, and organized by the Medicinal Plants Board, Eco Club of Dev Samaj College of Education and Yuvsatta (Youth for Peace) NGO

On 8th October 2020, Dr. Madan Gulati addressed the teachers of Eco Clubs of various Schools of Chandigarh at Medicinal plants Garden at Sarangpur and told the uses of Medicinal Plants and need of establishing herbal gardens in various schools. CLICK HERE to view the Media Clippings 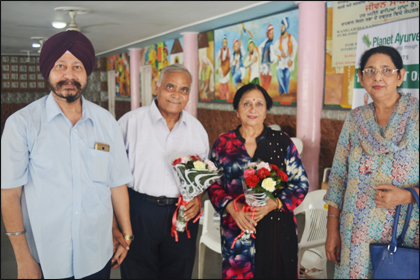 Interview of Dr. Madan Gulati for Radio Channel - 91.2 FM on Topic of Ayurveda

HOW TO GET RID OF DEPRESSION NATURALLY? | INTERVIEW OF DR MADAN GULATI (MD - AYURVEDA)

HOW WE CAN TREAT DIABETES IN AYURVEDA?

HOW CAN WE GET RID OF RHEUMATOID ARTHRITIS THROUGH AYURVEDA?