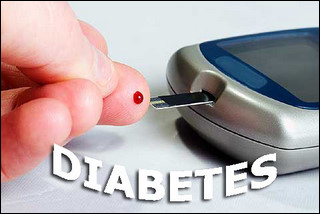 Glucose is a vital component of body. It is known as a source of energy for the cells which results in the formation of muscles and tissues of the body. It serve as the major energy source for brain cells. But if blood sugar get increased it can cause complications in the brain. Diabetes mellitus is known as a complex, long term, metabolic disease which comes into action when the body comes into the stage of high blood sugar level due to either inability of body cells to respond insulin or inadequate production of insulin or both. Due to high blood sugar, the damages occurs to nerves, blood vessels. It leads to the series of complications like heart disease, kidney disease, stroke, dental disease, depression blindness and problems in pregnancy.

1. Type-I diabetes is the condition when no insulin is produced in the body. There are only 10% cases worldwide of type-I. It is also known as insulin dependent or juvenile diabetes as it develops in early teenage years or adulthood. It happens when immune system destroys cells the pancreatic cells known as beta cells. These beta cells are responsible for the production of insulin. The people suffering from this disease take insulin injections throughout their life.

2. Type-II diabetes comes into action when the human body cannot produce required amount of insulin to run proper functioning of body. It is most common type of diabetes which occurs in 90% cases worldwide. It is a big health issue these days and will gradually increase if not taken seriously. It is different from type-I in only one thing; the immune system does not destroy the beta cells. The beta cells of pancreas get affected by either by some disease or an injury to the pancreas.

3. Gestational Diabetes - There is one more type of diabetes known as gestational diabetes found in pregnant women. This is observed in the women which have very high levels of blood sugar. These type of patients suffers from diabetes because their body cells are not able to produce sufficient insulin. If it is not diagnosed on time there can be a risk of complications during childbirth. The size of baby can be much bigger than the regular size during birth. It was observed that women with the rich in animal fat and cholesterol before pregnancy were more prone for the gestational diabetes, as compared to the women with less animal fat or cholesterol. Sometimes patients recover after pregnancy and sometimes this get converted into type II diabetic condition.

Genetic Factors - Heredity is important factor upon which it depends that who is likely to develop type-1 diabetes. The most important thing which passes from parent to child is genes, which carries the information/instructions to the body for the production of proteins, needed for the body's proper function. There are certain sets of genes responsible for the protection from type 1 diabetes, which can vary different population called as gene variants. Some gene variants carry information of proteins production called human leukocyte antigens (HLAs) on white blood cells. These are associated to the development of type 1 diabetes. HLA genes produces some proteins responsible to determine that whether the immune system recognizes a cell as part of the body or as foreign material. By the use of genetic testing the types of HLA genes carried by a person can be identified and also can show the detail of other genes linked to diabetes. However, most genetic testing is done in a research setting and is not yet available to individuals. Scientists are studying how the results of genetic testing can be used to improve type 1 diabetes prevention or treatment.

Autoimmune Destruction of Beta Cells - In type 1 diabetes, white blood cells called T cells attack and destroy beta cells. The problem with this disease is, most of the beta cells have been destroyed before diagnosis, due to which the patient is totally dependent upon insulin treatment to survive.

Viruses and infections - There are no reports on a virus causing diabetes by itself, but the relation is observed between these two because in some cases during or after a viral infection the diagnosis of type 1 diabetes occurs, suggesting a link between the two. The name of viruses linked with type 1 diabetes are cytomegalovirus, coxsackievirus B, rubella, adenovirus and mumps. The various ways are known for describing the ways through which these viruses destroy beta cells or boost an autoimmune cytomegalovirus which significantly damage the beta cells.

Insulin Resistance - Among the people who are overweight or obese, the insulin resistance is a common problem. Due to such problem the muscles and liver cells does not respond properly to insulin due to which the pancreas is forced to produce extra insulin. This all depend upon the beta cells which are producing enough insulin to control the blood glucose levels to the normal range. But if insulin production become irregular due to beta cell dysfunction, the glucose level rises which leads to prediabetes or diabetes.

Age - The growing age is also a risk factor in developing type 2 diabetes, because with the increase in the age, the weight of body increases generally and physically activity decreases. Due to which the risk of diabetes increases with the age. 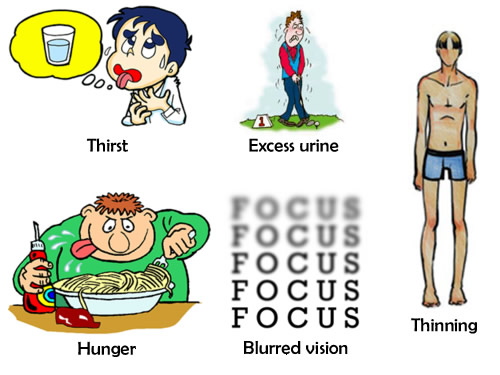 The symptoms associated with type-1 (high blood sugar) are as following:

The condition of low blood sugar is also known as hypoglycemia, can occur in patients of diabetes who are taking insulin. With the fall in blood sugar level below 70 milligrams per deciliter (mg/dL), the symptoms appears:

There are no specific symptoms of type 2 diabetes. If appear, they are different and vary person to person.

The Various Tests for Type 1 and Type 2 Diabetes and Pre-diabetes are as Following:

This blood test indicates the level of sugar for past the past two to three months but does not show daily fluctuations. It is calculate the blood sugar percentage associated with hemoglobin. If the blood sugar level is high there will be more hemoglobin attached with sugar. This is used to detect type 2 diabetes and pre-diabetes. It is not recommended for the diagnosis of type 1 diabetes or gestational diabetes. The A1C test is more easy and getting popular these days because it does not require fasting. This can be done at any time of the day.

In this type of blood sugar testing a blood sample can be taken at a random time. If the random blood sugar level measures 200 milligrams per deciliter (mg/dL) or higher, the patient is diagnosed as diabetic.

Tests for Gestational Diabetes are as Following:

To evaluate high risk factors for gestational diabetes the following teats are recommended:

The blood sample is collected from the patient who fast overnight. Then the fasting blood sugar level is measured. Then after drinking a glucose solution syrup, containing a higher concentration of glucose. After that the blood sugar level is checked after every hour for a period of three hours. Out of three readings, if two are observed higher than the normal values the person is diagnosed with gestational diabetes.

Benefits: It is the best herbal remedy for the diabetes. It is the mixture of various herbs which are effective in controlling blood sugar level. The herbs in this formulation help to control vata and kapha both which is the root cause of the diabetes. It also prevents diabetic neuropathy and other complications. Gurmaar (Gymnema sylvestrae): It has a gymneic acid in it. They gel with glucose molecule in the stomach and prevent their entry in bloodstreams. Tulsi (Ocimum Tenuiflorum): It acts as an anti-oxidant and anti-inflammtory.It helps to remove all toxins from the body. Karela (Momordica charantia): It includes a mixture of steroidal saponins, insulin-like peptides and alkaloids. It also contains Gurmein, it's a polypeptide similar to bovine insulin, which helps in reducing sugar level. Vizyasaar (Pteracarpus marsupium): Pterosilbene is the one most important active ingredient of pteracarpus extract for this purpose, may help support the body's natural ability to manage and regulate blood sugar levels. It may also regulate the glycosylated hemoglobin level. Ashwagandha (withania somnifera): It acts as an anti-inflammatory, anti-oxidant.it restores the strength. It stimulates the immune-system and promotes the healthy function of the body.

Benefits: It restores the imbalance created due to uncontrolled sugar and prevent complications of the diabetes. It is thought to have direct hypoglycemic activity, but this may depend on having a viable beta cell function in the pancreas. It improves the glucose tolerance without increasing insulin levels and to improve fasting blood glucose levels.

Benefits: It is the most effective herbal combination of diabetes and its complications. The salacia chinesis and Petrocarpus marsupium prove their efficacy in controlling diabetes. The herbs bitter gourd and Gymnema sylvestrea plays important role in decreasing the high sugar level. It also gives strength to the body also.

It consists of fenugreek (Trigonella foenum-graecum).

Benefits: It shows a significant decrease in blood sugar level by slowing down the digestion and absorption of carbohydrates. Because of the presence of galactomannan, fenugreek slows down the sugar absorption in the bloodstream.