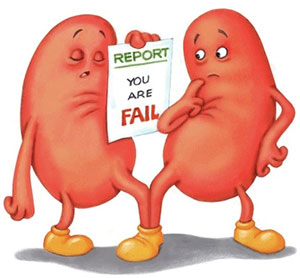 The Kidneys are a pair of bean shaped organs that are present in the back of the abdomen. Each kidney is about the size of a fist (4-5 inches long). The main function of the kidneys is to filter the blood. The Kidneys remove the wastes; maintain the fluid and electrolyte balance in the body.

What is Kidney Failure?

Kidney failure is the stage where kidney stops functioning properly and is not able to remove the waste from the blood and control the fluid level in the body. It can happen suddenly or gradually. Kidney failure is also known as the renal failure.

What are the Causes of kidney failure

The causes of the kidney failure are as follows:

What are the Types of Kidney Failure?

There are Two types of Kidney Failure:

The Causes for the chronic kidney disease are as follows:

A sudden drop in kidney function is known as acute kidney failure. It can be life threatening and requires immediate treatment.

Risk factors for the acute kidney failure are as follows:

The causes of the acute kidney failure:

What are the Signs and Symptoms of the Kidney Failure?

The signs and symptoms of the kidney failure are as follows:

In the early stage there are no symptoms but there are few signs and symptoms which show kidney failure are as follows as:

How to Diagnose the Kidney Failure?

The Diagnosis of the kidney failure can be done by the following test:

Ayurveda says kidney is called vrik which comes under mutrava srotas dushti. Imbalance of the three doshas vata, pitta and kapha results into kidney failure. Planet Ayurveda provides best combination of effective herbal remedies such as Revive Kidneys Pack for Ayurvedic treatment for kidney failure. These herbal remedies are prepared from using best quality herbs and strictly follow the principles of Ayurveda. All these herbal remedies of Planet Ayurveda are 100 percent pure, natural and vegetarian. These are free from chemicals, additives and preservatives. These are safe to use as these are free from side effects.

Benefits: Varuna (Crataeva nurvala) acts as an anti-inflammatory, anti-biotic and have urinary renal supportive qualities. It is also very effective in urinary tract infection. It is a natural diuretic. Purnarnava (Boerhaavia diffusa): It helps to remove the toxins from the kidneys, hence act as a natural cleanser. It helps in proper functioning of the kidney. Gokshur (Tribulus terrestis): It helps in the flow of urine; it calms and soothes the inner cell membrane of the urinary tract. It revitalizes the organs and improves the immune system. Kaasni (Cichorium intybus): It gives strength to the kidneys. It is very effective in acute and chronic kidney failure. Bhumi amla (Phyllanthus niruri): It acts as a diuretic. Shirish (Albezzia lebbok): It has an anti-inflammatory property and helps to remove the toxins from the body. Shigru (Morienga oleifera): It helps to reduce the inflammation of the kidney and also improves the blood circulation in the kidney. It boosts the immune system also. Apamarg (Achranthyus aspera): It acts anti-biotic, anti-inflammatory, disinfectant and diuretic. It also helps to purify blood.

Benefits: Punarnava (Boerhaavia diffusa): It is commonly known as a "hogweed". It acts as a diuretic. Varun (Crataeva nurvela): It is very effective in urinary tract infection. It also helps to remove the kidney stones. It provides strength to the kidney. Goksur (Tribulus territis): It is an herbal tonic for urinary system. It clears away the obstruction in the urinary tract; hence it also acts as an anti-infective. Pallash (Butea monosperma): This herb helps in proper functioning of kidneys. It helps to control blood sugar level also. It also boosts the low liver function, which is one of the major cause of kidney failure. Kaasni (Cichorium intybus): It deals with the complications of the kidney failure. It also helps to increase red blood cells count.

Benefits: It is the best herbal formulation for the kidney failure. It helps to reduce the urea and creatinine level. Amla (Emblica officanlis), Haritaki (Terminalis chebula): They help to remove toxins from the body and reduce fluid accumulation in the body. Ferric oxide calx (Mandur bhasm): It helps to increases the red blood count. It is a natural herbal diuretic. Pippali (Piper longum) and Marich (Piper nigrum) help in proper functioning of liver. Haridra (Curcuma longa): It acts as an anti-inflammatory and anti septic. It helps to reduce the inflammation of the body. It is also a natural herbal remedy for ascites due to kidney failure.