How to Treat Aplastic Anemia in Ayurveda? 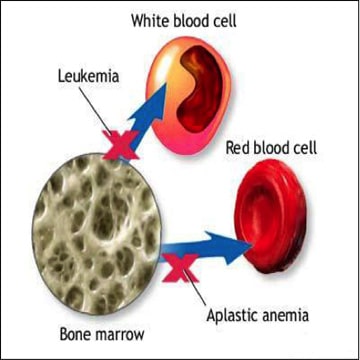 What are the Symptoms of Aplastic Anemia?

What are the Factors Which Cause Aplastic Anemia?

An Ayurvedic Aspect of Aplastic Anemia

Ayurveda is the best treatment for cancer and is probably the only remedy where cancer is cured without any side effect. Chemotherapy and radiotherapies are the treatments which are used to kill cancer cells but it has so many side effects also. Arbuda is the Sanskrit name of cancer, in which the aggravated dosha are accumulated in a particular area of the body that ultimately leads to the formation of lumps and mass of cancer cells in that particular area. All the three doshas (kapha, pitta, and vata) are involved in Aplastic Cancer which causes the vitiation of Rakta, mamsa, and medo. There is also the involvement of Srotamsi (channels of the body), Agni (biological fire), Satkriyakala (involvement of generic sequence), and Sapta dhatus (body tissues).

Planet Ayurveda is offering the best combination of effective natural herbal remedies such as anemia care pack for the natural treatment of aplastic anemia. This pack contains natural herbs that are 100% pure and authentic. These formulations are formulated under the principles of Ayurveda and have no side effects.

Punarnava mandoor has diuretic properties that eliminate the excessive water from the body. In Ayurveda, this formulation has been used to clear out the excessive Kapha dosha from the body since ages. These tablets acts on RBC’s hence treats anemia.

Wheatgrass powder is prepared from the fresh and organic leaves of wheat plants because these improve the strength and act as an immune-modulator that increases the immunity of the body. It alleviates vata and pitta dosha and does not vitiate Kapha dosha. This powder boosts up the formation of RBCs and thus, treats anemia.

Arogyavardhini vati is an ancient classical Ayurvedic formulation that has been used in Ayurveda for the treatment of anemia and jaundice. It contains Kutki herb that clears out the accumulated bile from the body and also improves the strength of the body.

Take proper and healthy balanced diet because it maintains the overall health of the body. Include foods in your diets such as spinach, eggs, beetroot, nuts, soybeans, whole grain bread, pomegranate, red meat, tomatoes, dates, and seafood.