Many males are silently suffering from sexual dysfunctions. They usually go for unreliable products available in market to resolve the problem of premature ejaculation. Though these products may end up you with adverse effects on health.

This herbal formulation helps to improve male reproductive system. Some of the herbs are effective herbal remedies which are described in ancient Indian literature like "kamasutra" as well as other classical texts. These herbal remedies are time tested which are the rarest and costly ingredients like Indian Ginseng, Tribulus terrestris, Asparagus, Shilajit, Saffron & Musli etc. were used by kings in India during ancient times. When such effective herbs for premature ejaculation and erectile dysfunction are available then why to take synthetic, chemical based drugs. Our products are all natural, safe & economical. Free from side effects, chemicals or preservatives. 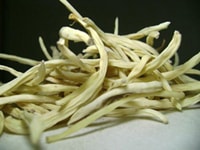 This is a small herb belonging to Asparagaceae family. The plant is mentioned in many chapters of restorative health in ancient Ayurvedic texts. Roots of the plant are used, which are like small tubers. Safed Musli is very popular in India, Afghanistan, China and Pakistan since many centuries. The tubers are rich in saponnins and natural anti-oxidants. Safed Musli is described in ancient Ayurvedic text called Raj Nighantu.

Raja nighantu is one of the noted book on herbal pharmacognosy and pharmacology. The subject is called "Dravyaguna" in Ayurveda (Herbal Pharmacology).

The name Raja nighantu itself reveals that it is the king of all such texts relating to literature on Indian herbs. Narahari pandita is the author of this text. There is controversy with regards to time of Rajanighantu which ranges between 13th century to 17th century.

AYURVEDIC ENERGETICS OF SAFED MUSLI (ENGLISH AND IN HINDI) 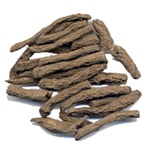 The herb is also known as "Taalmooli" in Sanskrit language. It belongs to Hypoxidaceae family and the Latin name is Curculigo orchioides.

It's a small shrub with thick leaves. The herb grows mainly in southern India and in Himalayan Mountains up to height of 6000 ft. It is rich in natural tannins. The roots are used for their medicinal purpose in Ayurveda. It is described in Ayurvedic text of herbal pharmacology "Bhavprakash Nigantu".

AYURVEDIC ENERGETICS OF SAFED MUSLI (ENGLISH AND IN HINDI) 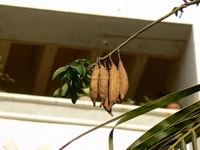 This herb belongs to Bombacaceae family. It is a huge tree that grows as tall as 125 feet in height. Bark and stems bear sharp spicules. The roots of the juvenile plants (1 -2 years of age) are used as semal museli.

"Mochrasa" is a resinous extract hat seeps through its bark.

This tree is found all over in India, growing abundantly in the forest areas.

A distinct explanation of this plant is present in many Ayurvedic books on pharmacology of herbs. One of these is "Rajnighantu" in which a very precise but apt explanation of safed museli can be found.

Rajnighantu – (In between 13th to 17th century)

AYURVEDIC ENERGETICS OF SEMAL MUSELI (ENGLISH AND IN HINDI)

It is a common shrub belonging to the "Zygophyllaceae" family which commonly grows all across India. The Latin name of this plant is Tribulus terrestris. This herb bears sharp spicules which are strongly piercing in nature.

In detail explanation this herb can be found in "Bhavprakash nighantu", an ancient Ayurvedic text. The following excerpt from the book rightly explains the many qualities of this herb.

AYURVEDIC ENERGETICS OF GOKSHUR (ENGLISH AND IN HINDI) 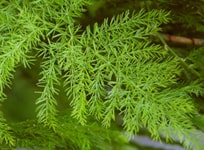 The Latin name of the plant is "Asparagus racemosus". It is a climber with numerous needle – like spicules. It belongs to the "Asparagaceae" family. As per the name "shatavari" means "the one that cures hundreds of diseases".

The plant grows widely in the Indian terrain up to the Himalayas at a height of 4000 feet above sea level.

It also grows in the neighboring countries of Sri Lanka and Nepal.

Detailed explanation of this herb can be found in Dhanvantri nighantu, a legendary book having a vast literature on herbs.

AYURVEDIC ENERGETICS OF SHATAVARI (ENGLISH AND IN HINDI) 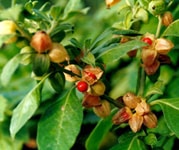 It is a dense and hairy shrub with the Latin name "Withania somnifera". The plant belongs to "Solanaceae" family. Leaves are simple, round to oval in shape.

The word "Ashwagandha" in Hindi means "smell of a sweating horse".

AYURVEDIC ENERGETICS OF ASHWAGANDHA (ENGLISH AND IN HINDI) 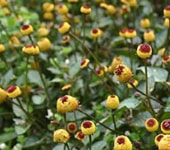 It is a hairy shrub with the Latin name "Anacyclus pyrethrum". The plant belongs to "Asteraceae" family. It has not been well described in the ancient Ayurveda texts. Only later in the books like "Bhavprakash" and "Gadanigraha" both great literary works on plants, the description of Akarkara can be found. The plant is quite sturdy as it can remain potent for as long as 7 years.

This plant is a native to the Arabian countries and grows in Northern Africa, Arabia and Syria. It is rarely found growing in India.

"Shaligram nighantu" is one of the many texts available on plants and their properties. Akarkara has been discussed briefly in this book.

"Akarkarabh and akallak are the synonyms of akarkara. It has a hot potency, improves stamina, pungent. It pacifies vata body energy, inflammation and sinusitis."

AYURVEDIC ENERGETICS OF AKARKARA (ENGLISH AND IN HINDI) 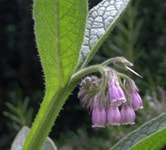 The Latin name of the plant is "Pueraria tuberosa". It belongs to the "Leguminosae" family. Vidarikanda is also known as "Indian kudju". It is a woody climber with stem modified as tuber. The herb has a large coiling and climbing vine with huge tuberous roots.

The tubers are rich in carbohydrates and proteins.

It is found all over in India, in the Himalayan region as well.

"Bhavprakash nighantu" vividly explains about this herb with all its properties.

AYURVEDIC ENERGETICS OF VIDARIKANDA (ENGLISH AND IN HINDI)

It is commonly known as "Air potato". This is a rapidly twining herbaceous vine with aerial tubers and may have an underground tuber as well. Due to the presence of large aerial tubers or bulbils, it is known as Dioscorea "bulbifera" and "air potato".

The herb belongs to "Dioscoreaceae" family and its Latin name is Dioscorea bulbifera.

It is found in the Himalayan Mountains of India up to the height of 6000 feet above sea level.

The tubers of air potato contain many albuminoids, carbohydrates and fats. "Kaideva nighantu" is a pharmacological dictionary in which varahikand has been explained as quoted below.

(Kaideva nighantu is a popular book containing pharmacological explanation of many plants.)

AYURVEDIC ENERGETICS OF VARAHIKAND (ENGLISH AND IN HINDI) 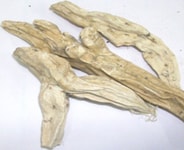 It belongs to the "Asteraceae" family and is a common herb used in the Unani system of medicine. The Latin name of the herb is Centaurea behen.

It is grown in Europe, North Africa, India, Northern Iraq and Armenia. 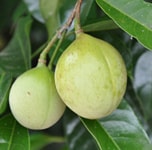 It is a huge tree with a peculiar fragrance and a yellow exudate which can be collected from its bark. Jaiphal belongs to the "Myristicaceae" family. This tree is a source of many oils, proteins, starch, minerals and resins.

More than 72 species of the tree grow in India, Sri Lanka, Malaysia and North Eastern Australia.

AYURVEDIC ENERGETICS OF JAIPHAL (ENGLISH AND IN HINDI) 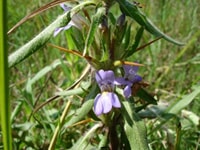 It is a small and hairy shrub growing to a height of 2 -4 feet. The Latin name of the plant is" Hygrophila spinosa" belonging to "Acanthaceae" family.

This plant prefers swamps and marshy areas growing near lakes & shrines etc. It is a plant found commonly growing all over India. In Ayurveda, it is popularly known as "Kokilaksha".

The literature from "Rajnighantu" explains in detail, the various properties and uses of Taalmakhan in the following verse.

AYURVEDIC ENERGETICS OF TAALMAKHAN (ENGLISH AND IN HINDI)

Kesar is also known as "Kumkum "in Ayurveda. In English, it is commonly known as "Saffron". The shrub belongs to "Iridaceae" family and its Latin name is Crocus sativus.

Red colored threads of the saffron spice are actually the styles and stigma of the flowers of crocus sativus.

The taste and fragrance of saffron is attributed to the chemicals picrocrocin, and safranal.

It is widely grown in India, China, Italy, Greece, Spain, Turkey and France. Iran is the world leader in the production of Saffron accounting for approximately 90% of the world's produce.

Ayurveda is an ancient system that campaigns about holistic health. The various pharmacological properties of saffron have been discussed in "Dhanvantri nighantu", a highly valued text book of Ayurveda.

AYURVEDIC ENERGETICS OF SAFFRON (ENGLISH AND IN HINDI)

Aphrodisiacs are any kind of food drink or eatable products that can improve the sexual desire in a person. According to Ayurveda, the ancient healthcare system of India, the "Shukra Dhatu" or Semen is 7th Dhatu in the body. There are 7 Dhatu's – Ras, Rakt, Maans, Med, Asthi, majja, Shukra. For quality semen production and healthy functionality of reproductive system, it is very important to have healthy, balanced and nutritious diet. The diet can be supported with natural herbs like Asparagus, Tribulus, Wild Yams, Museli along with simple food items like milk, sugar, purified cow ghee ( Butter oil ), dry fruits etc.

There are many people who suffer from an unsatisfactory sexual life or have certain health issues like low sperm count, premature ejaculation, low vitality and erectile dysfunction. People world over are searching for natural supplements for premature ejaculation. They want solution for their problem of erectile dysfunction and low sperm count. Everybody wants healthy sex life but our dependency on artificial drugs and following a lifestyle of living away from nature has caused all the problems.

Appropriate diet and exercise play a vital role in the improvement of health and wellbeing in such people. Many of such problems are more mental than physical and can be managed by minor variations in the diet and lifestyle.

Many nutritional supplements are available nowadays that provide the body with the right kind of nutrition that helps in overall improvement of health. It is best to use natural products that are GMP certified and have the best quality ingredients used.

Ayurveda is the oldest system of medicine and has consistently provided the best natural solutions to most health concerns that have affected us over the years.

Ayurvedic texts explained many natural combinations of herbs to provide support in maintaining healthy reproductive function. They improve the functioning of the "Shukra dhatu" that takes care of the male reproductive system.

COMMON SYMPTOMS OF A WEAK REPRODUCTIVE SYSTEM IN MALES

CAN REPRODUCTIVE HEALTH BE PERMANENTLY RESTORED IN MALES?

Permanent treatment of any health condition requires a combination of the right diet, stable state of mind and appropriate supplementation besides medication. It is a variable phenomenon that differs from individual to individual. Though improvement in one's lifestyle, dietary habits, sleep pattern is highly recommended.

We are not sick when we are born. Slowly when we grow old, we start getting diseases. The hormones get imbalanced, the metabolism gets disturbed and if the eating habits are wrong and there is no exercise, then we develop many health issues. The herbs are like an additional source of nutrition.