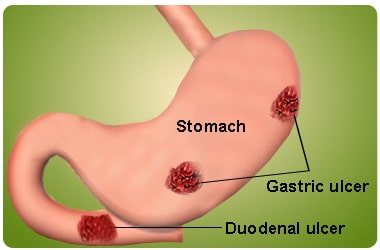 In Ayurveda, improper dietary habits are considered to be the cause of the disease. Irritation of the mucosa by coffee, cigarette, alcohol, and drugs like corticosteroids and pain killers lead to ulcer formation. Recurrent attacks of hyperacidity (gaseous eructation) after consumption of spicy foods are linked to ulcer formation.

Infection with bacterium is considered to be the cause of recurrent attacks of hyperacidity and ulcers. Above all, modern rat-race is blamed for the increasing incidence of ulcer. Stress and anxiety are linked to increase acid secretion and result is ulcer.

Pain in the chest is the main complaint. The major complication of ulcer is heamatemesis (vomiting of blood). It is a serious condition and is treated under expert supervision. A regard, the typical abdominal colic or pain, the onset occurs during the ingestion of food. It may occur soon after consumption of food.  Pain is chronic in nature and it does not respond to the prescribed dietetic-regimen has been described as annadravashula in Ayurvedic system of medicine. The pain in chronic cases of annadravashula is constant, usually no relationship with food and disappears after a vomit, sometimes.

A patient of Annadravashula gets symptomatic relief by emesis of the gastric acid and by adding a mild laxative on concurrent basis for long-term therapy. The patient should avoid the sour and hot food items till he or she is fully alright.

In the treatment of ulcer, medicine and strict diet regimen have equal significance. Demulcent (soothing) foods should be consumed to prevent irritation to the stomach.

For haematemesis, Chandrakala rasa is the best remedy. One tablet, thrice a day with water, give favorable response.

What Planet Ayurveda Offers in Annadravashula?

Spicy and salty foods should be avoided at all costs. Small amount of olive oil and milk are helpful for ulcer patients. Alcohol and cigarette should be forbidden for six months after proper healing of the ulcer. Indiscriminate use of pain-killers (aspirin and ibuprofen) and steroids should be avoided.