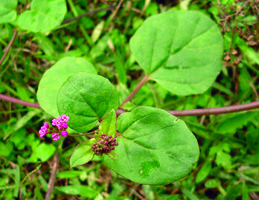 Punarnava is found throughout India and Brazil. It is a very important plant for urinary system. It can be white or red and has long since been used as a treatment of liver disorders such as jaundice and hepatitis. Throughout the tropics, it is used as a natural remedy for Guinea worms. It is a wonderful natural diuretic. Ayurveda- the ancient healthcare system of india recommend punarnava mandur tablets for various fluid retention problems.

Whole herb, root. Each part has a different therapeutic value and must be prepared in its own way for maximum benefits. Found throughout India, especially during the rainy season.

The root of this plant is a powerful Rasayana (longevity enhancer). It is good for the kidneys, especially the nephron cells which are damaged by long-term hyperglycemia (diabetes). And it pacifies two of the main laws of physiology (Vata and Kapha).

According to Ayurveda, Punarnava is diuretic by increasing renal blood flow. It is bitter, cooling, astringent to bowels, useful in biliousness, leucorrhoea, inflammations, asthma etc. The leaves are useful in dyspepsia, tumors, and abdominal pains. According to Unani system of medicine, the leaves are appetizer, alexiteric, useful in opthalmia, in joint pains. Seeds are tonic expectorant, carminative, useful in lumbago, scabies. The seeds are considered as promising blood purifier.It is excellent natural diuretic. 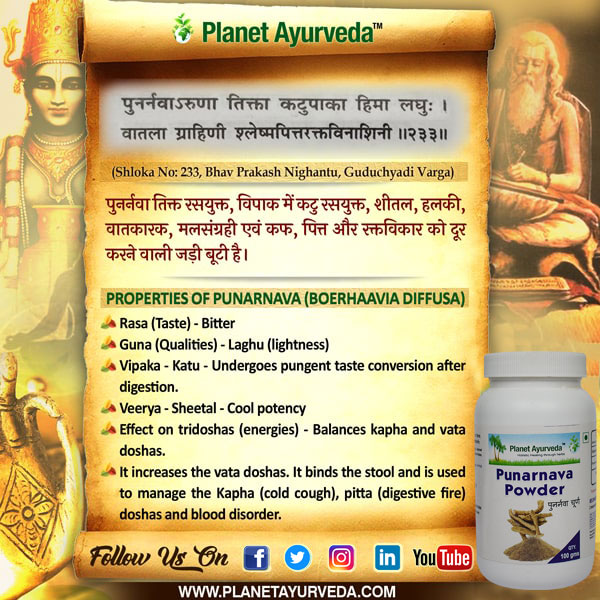 It is a classical ayurvedic formulation for anemia, Low Platelet count, Low RBC count, Swelling around Joints, Generalised Swelling, Gout and other endotoxins accumulation. It is also diuretic and is useful in renal disorders. In renal failure, it is used with Mutrakrichantak Churna for getting good results. Kidney support can also be used with it.

Punarnava mandur is a traditional Ayurvedic formulation which is prescribed in conditions like Anemia, Jaundice, pedal edema or generalized edema, Swelling and fluid accumulcation, fluid retention in feet. It is also a best herbal remedy for ascites, Disorders associated with Liver and Spleen, Skin diseases, Kidney diseases, fluid retention due to kidney failure or liver failure.

error: Content is protected !!
We use cookies to ensure that we give you the best experience on our website. If you continue to use this site we will assume that you are happy with it.I AgreePrivacy policy