In Ayurvedic philosophy, term "rasa" is used for various aspects. Various aspects are discussed briefly for better understanding of rasa with respect to Dravyaguna and medicine.

Dravyaguna is an integral part of Ayurvedic curriculum. Dravya stands for the constituents of the universe and guna stands for the property. Study of Dravyaguna revolves around seven parameters (Dravya, guna, rasa, vipaka, virya, prabhava and karma), which are described as the nucleus of Ayurvedic drug formulation.

Drug Formulation In Ayurveda Is Based On Following Seven Parameters:

Dravya is described as a substance used for medicinal purpose. According to Ayurvedic theory, every component of the universe is dravya and has medicinal value. Drugs derived from herbs, minerals and animal source, are included among dravya. Charaka Samhita, the Ayurvedic treatise on medicine, has mentioned dravya to be the nucleus of Ayurvedic pharmacy.

Taste is a fundamental concept of Ayurvedic Medicine but exceptions are always encountered. 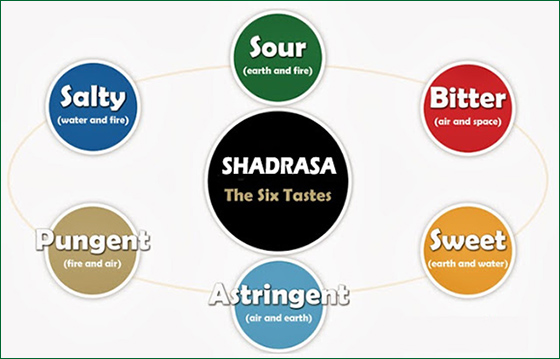 Water plays important role in the composition of tastes. When interaction of the water element takes place with other elements, the evolution of tastes takes place. The taste of a particular substance depends on the predominance of one of the elements.

The Evolution, Properties and Functions of Six Tastes have been Summarized Below: