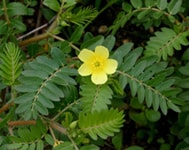 Tribulus terrestris, the Latin name for puncture vine, has gained popularity in the past decade among male athletes who attempt to build muscle by increasing testosterone production.

Tribulus terrestris grows naturally in North and South America, Australia, Europe, the Middle East, India and Africa. It is considered a noxious weed that grows along roadsides and in vacant lots. In fact, its seeds are sharp and painful to step on, and its fresh leaves are toxic to livestock, especially sheep, when consumed in large quantities. The berries and aerial parts of Tribulus are the parts most often used in traditional medicine for a variety of ailments including colic, headache, nervous disorders, constipation, and sexual dysfunction.

The Tribulus berries and aerial parts contain a number of different substances including saponins, glycosides, flavonoids, alkaloids, resins, tannins, sugars, sterols, and essential oil. The steroidal saponins, including protodioscin, are considered the most active components. Protodioscin is also one of the precursors of the DHEA, which is a marker for ageing. Thus Tribulus is a very useful anti-ageing herb.

2. One study found Tribulus to be an effective aphrodisiac. Sexual behavior and intracavernous pressure (ICP-blood flow into the corpus cavernosa of the penis) were studied to understand how Tribulus stimulates sexual arousal.

Tribulus also Benefits a Number of Other Health Concerns:

Tribulus Power is not only useful in premature ejaculation or erectile dysfunction but also beneficial for people suffering from weakness due to diabetes, prostate enlargement, urinary tract obstructions or weakness due to any other reason as this herbal supplement nourishes the entire system as well as male reproductive system.