Yoga and Meditation in Ayurveda

Yoga and meditation are integral part of Ayurvedic curriculum. According to one school of thought, Yoga is an ancient science aimed at balancing the mind for the sake of self-realization and awareness, whereas Ayurveda is a sister concern of Yoga, aimed at balancing the mind in relation to the body. Yoga evolved 6000 years ago and is a scientific method for spiritual development. 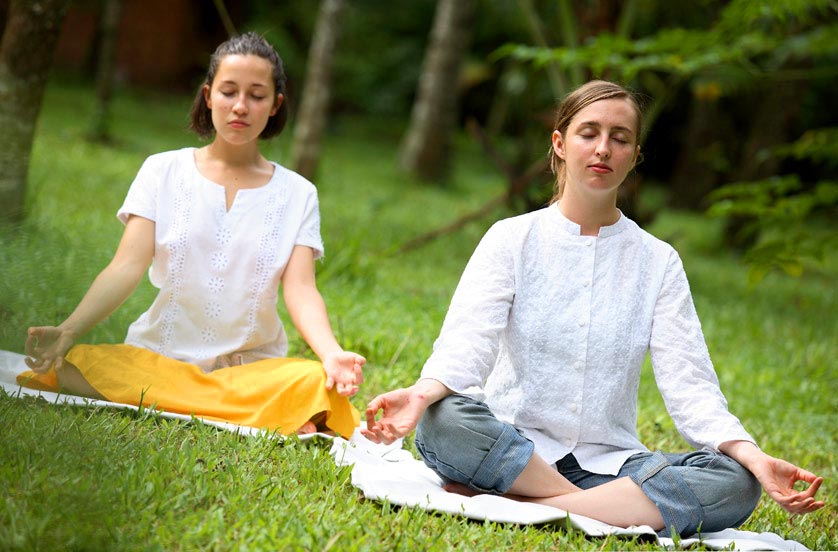 Yoga is a discipline to improve or develop one's inherent power in a balanced manner. It offers the means to attain complete self-realisation. The literal meaning of the Sanskrit word Yoga is 'Yoke'. Yoga can therefore be defined as a means of uniting the individual spirit with the universal spirit of God. According to Maharishi Patanjali, Yoga is the suppression of modifications of the mind.

Yoga is derived from Sanksrit "Yuj" which means union. Thus the chief goal of Yoga is that mind, body and spirit should work as union. Since Yoga is ancient science, it has undergone several experimentations for achieving the goal of union. "Samadhi" is the sate of union, in which an experience of a person is not confined to union of mind, body and spirit, but the whole universe seems to be interconnected. Yoga is a philosophy of life, a code of conduct, an attitude and an approach, as well as an art of living which is capable of ensuring physical well-being, mental peace, harmony, moral elevation and spiritual uplift.

Not let us establish link between Ayurveda and Yoga. Both, Ayurveda and Yoga have same purpose; to promote health and get rid of diseases by restoring balance amongst its three fold natural elements of vata, pitta and kapha. Since the origin of Vedic Age, the Ayurveda and Yoga are being practised. Yoga has multifarious benefits including mental and physical rejuvenation, increased focus on things, prolonged existence and mental endurance. Yogic Asna linked with Ayurvedic principles are numerously manifold in sense of their technical modes and therapeutic use.

Meditation is a practice in which an individual trains the mind or induces a mode of consciousness, either to realize some benefit or for the mind to simply acknowledge its content without becoming identified with that content, or as an end in itself.

The philosophy and practice of Ayurveda is not only limited to restore balance among biological humours and ease the diseases state of the human body but it also targets spiritual growth. Since ancient immemorial, Ayurveda has been teaching us to keep in a state of equilibrium and to get rid of extremes so that the central nervous system can feel the existence of the Almighty or Divine. Thus, following Ayurvedic principles together with the practice of meditation, one can avoid diseases altogether and embark on the spiritual evolution beyond the elements of fire, air and water.

Vipassana, which means to see things as they really are, is one of India's most ancient techniques of meditation. It was taught in India more than 2500 years ago as a universal remedy for universal diseases.

An alarming awareness has been observed in health and natural measures among people by Yoga and Pranayama which has been proven an effective method for boosting health in addition to prevention and management of diseases. With increasing scientific research in Yoga, its therapeutic aspects are also being explored. Yoga is reported to reduce stress and anxiety, improves autonomic functions by triggering neurohormonal mechanisms by the suppression of sympathetic activity, and even, now-a-days, several reports explains Yoga is beneficial for physical health of cancer patients.

Many clinical studies have studied and proved efficacy of specific Yoga postures in anxiety, arthritis, asthma, cardiovascular diseases, chronic pain, depression, diabetes, irritable bowel syndrome, menopause, premature ejaculation and prenatal health. Because of its nature, scientific research on Yoga is published in a wide variety of journals. Over 80 journals of varying quality and accessibility in at least 15 countries contain one or more article. Just fewer than 50% of studies are published in Indian journals. Another 25+% appear in US journals.

Asthanga Yoga comprises eight aspects: yama (universal ethics), niyama (individual ethics), asana (physical postures), pranayama (breath control), pratyahara (control of the senses), dharana (concentration), dyana (meditation), and samadhi (bliss). Each limb is connected with the whole, in the same way that bodily limbs are all connected. If someone pulls the body by the leg, the rest of the body will automatically follow. In the same way, when one pulls one of the eight limbs of yoga, the others will naturally come. They are not stages to be achieved in succession.

Morarji Desai National Institute of Yoga is an autonomous Institution fully funded by Govt. of India, Ministry of Health and Family Welfare, Department of AYUSH. The institute is involved for planning, training, promotion and coordination of Yoga education, training, therapy and research in all its aspects.