Uses and Benefits of Ashwagandha Capsules

Ashwagandha capsules is very beneficial herbal medicine for fatigue, stress, anxiety, palpitation, aging, nervous breakdown, neuropathy due to diabetes, chronic fatigue syndrome, loss of weight due to cancer or diabetes or any other reason.

Regular use of Ashwagandha capsules brings the strength back to muscles, Relieves the muscle spasms, fatigue and calms down the system. It is a nerve tonic, enhances stamina physical as well as mental. It can be given to growing children, as well as to old age people.

Following Benefits of Ashwagandha Capsules are Evident within few Days of Using them:

The anti-aging effects of Ashwagandha are seen when it is regularly consumed by a person. It shows following significant improvements in hemoglobin, red blood cell counts, hair melanin concentrations, and serum cholesterol concentrations are reduced.

Ashwagandha is known to increase stress resistance, improves memory-related performances, and protects the individual against the stress-induced responses as anxiety, and physiological imbalances. Thus Ashwagandha shows an "anti-stressor" effect. Ashwagandha suppresses stress-induced increases of dopamine receptors within the brain. In addition, Ashwagandha exhibits an antidepressive effect.

Ashwagandha - A Miracle Herb with Vast Variety of Uses

Following are the Indications:- 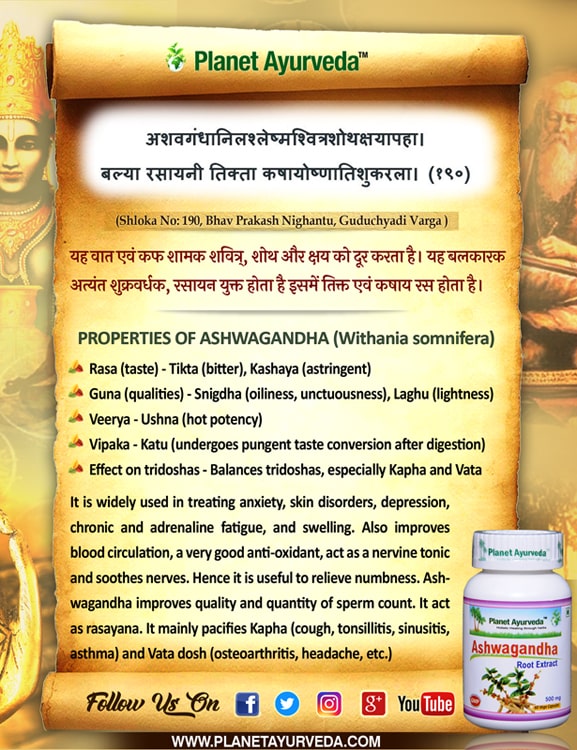 Preparations and Formulations of Ashwagandha

Ashwagandha is used in Ayurvedic medicine in powder, decoction, and medicated wine, mixed with clarified butter, combined with honey or sugar syrup, capsules or as medicated oil. The most common form is as an alcoholic extract or capsules, of the powdered root.

The Various Preparations that are Described in Ayurvedic Medicine or Ras Shastra of Ashwagandha are as following:

A preparation in which the herb Ashwagandha is prepared with the Ghee.

Finely crushed powdered form of the preparation of the Ashwagandha root.

Within this preparation of the drug it is formed in such a way that a paste form is produced that can be licked by the patient.

Saubhagyasunthipaka - A preparation that comprises of the Ashwagandha and ginger or Shunthi as its major constituents while other drugs are taken in smaller proportions.

Ashwagandha preparation made in ghee is prepared for children

Ashwagandha preparation widely used as a painkiller by ayurvedic practitioners.

it is also a preparation in which Ashwagandha is in major amount.

Quantity of These Preparation that Should be Consumed by the Patients or is to be Prescribed by the Practitioner: