What are the Therapeutic Uses of Varun (Crataeva Nurvala) ? 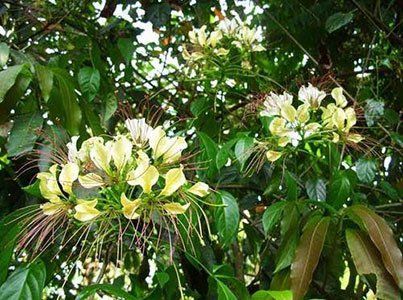 Crataeva nurvala is a deciduous tree of medium size. It can grow to 50 feet high. The bark is smooth and brown in color and has horizontal wrinkles on it. Its branches have white patches with purple and yellow lines. Leaves grow up to 12 cm and its leaflets are oval in shape. Its leaves are trifoliate. It flowers in March and fruits in June. Its flowers are white and greenish in color. Crataeva's fruits resemble lemon in shape. In India it is usually found near temples, planted for healing purposes. Destructive harvesting and deforestation have endangered the survival of the plant. As a result of this endangered condition of this plant govt. have made this plant vulnerable and endangered.

Other Names of Crataeva Nurvala

It is known differently in various languages

Which Family Does it Belong to?

Crataeva is found throughout India, especially along rivers and streams in sub-alpine zones. It grows well in wet soil with ph 7 and a good amount of sunlight. In India, it is found in Kerala, Madhya Pradesh, and Assam.

What is its Chemical Composition?

Varunol and triterpenoids are found in its roots and stem bark. Leaves consist of flavonoids including rutin, quercetin, and isoquercetin.

What is its Botanical Classification?

Which part of this Plant is Used?

What are its Medicinal Properties given in Ayurveda?

What are it's Therapeutic Uses?

The bark of this plant is being used for more than 3000 years in Ayurveda to treat various diseases. Bark and leaves of this plant are being used extensively for preparing herbal medicines.

What is its Effect on Dosha?

According to Ayurveda, all the ailments are caused due to an imbalance of dosha. There are three doshas, Kapha, vata and pitta. Crataeva nurvala promotes pitta and pacifies Kapha and Vata.

What are its Effects on Kidney?

Crataeva is a valuable herbal remedy to treat various renal conditions, like

How is Used in Unani Medicine System?

Its bark is used for urinary troubles, improving appetite and decreases secretion of bile and phlegm.

How it is Used in Siddha?

In Siddha it is known as maralingam, its bark stimulates the liver and acts as a laxative and improve appetite.

Are there any Side-Effects of Crataeva Nurvala?

How to Use it?