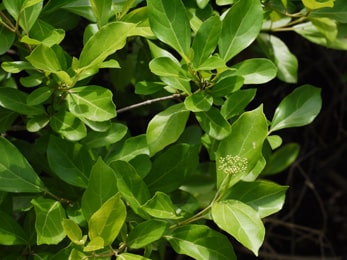 Agnimantha is very important medicinal plant mentioned in texts since Vedic period. It is described as one of the ten herbs of Dashamoola. Agni means fire and mantha means to shake and its wood is rubbed together to produce fire in ancient times. This herb is best Vatahara and Shothahara according to Acharya Charak. Agnimantha is a flowering plant in Lamiaceae / vibernaeceae family. It resembles like large shrub or small trees growing up to 9 meters in height. It is found with yellow bark and brown colored woody aromatic root. It is small herb commonly distributed in India and Sri Lanka. It grows along with other plants in a group. It has simple, ovate, opposite, membranous and irregularly toothed leaves. Flowers of this herb are small white colored with unpleasant smell. Fruits are saucer shaped calyx that surround the base, black when ripened.

Agnimantha, Jaya, Vataghni and Sriparna are the various names of this herb because of its various features.

When sticks of Agnimantha are rubbed together they produce fire that is why it is called Agnimantha.

It helps to overcome various diseases and called jaya.

Due to very beautiful appearance of leaves it is called Sriparna.

Agnimantha is widely distributed throughout India. It is found mostly in dried parts. It is easily available in upper Gangetic plains, Uttar Pradesh, Bihar and Orissa etc. it is also easily available in coastal areas of southern India and dry regions of western coast. It is also found in banks of ganges and Bengal. Flowering season of this plant is from April to June.

It balances vata and kapha.

Botanical name of Agnimantha is Premna mucronata. Rasa of this herb is katu and tikta and virya is ushna. Effect of herb on dosha is kpahavataghna. It is used in various disease like Shotha and shola, pandu, Arsha, Shleshma, Agnimandya and Adhmana.

According to this shalok Agnimantha, jay, sreeparni, ganikarika, jaya, jayanti, tarkari, nadya and vayjanti are the synonyms of this herb. This herb is anti-inflammatory (shoth nashak), hot potency (ushan veerya), pacifies vata and kapha (kapha vata hara). It is pungent (katu), bitter (tikat), astringent (kashay) and sweet (madhur) rasa and It is fire productive (deepan karma) in nature. It is best used to treat anemia (pandu roga).