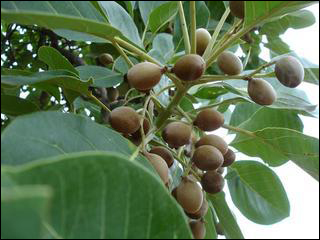 Bibhitaki (Terminalia bellirica) as the name suggests, makes the persons fearless of all diseases and it keeps us away from diseases. Vibheetaki is the common synonym used for bibhitaki meaning lack of fear. Bibhitaki is one among the constituents of 'triphala'. It is a laxative and in Ayurveda, it is used for purgation therapy.

Terminalia bellirica is a large deciduous tree and is spread over the lower hills and plains of Southeast Asia. It reaches a height up to 30 m. The long, oval, alternate leaves are more crowded towards the branch ends. Flowers of bellirica are simple and solitary, may show white or yellow color and have an offensive odor. The upper part of the bellirica tree is male and the lower female. Fruits are presented in drupes and have ovoid shape. The seeds of bellirica are called as bedda nuts.

In India, two varieties of Terminalia bellirica can be seen; one with a globular fruit and the other with ovate and larger fruits.

The health benefits and medicinal properties of bibhitaki is innumerable. Bibhitaki is a real fighter and warrior, the one who keeps us away from all diseases.