What are the Uses and Benefits of Ptelea Trifoliata (Hoptree)? 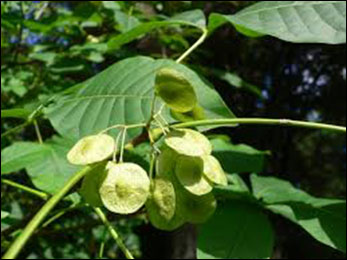 Ptelea Trifoliata is commonly known as the hoptree. It is a dense, rounded deciduous shrub which grows up to 10 to 15 feet in height and forms a broad and a grey trunk. The common names of this shrub are water-ash, common hop tree. It belongs to the family Rutaceae.

It is native to North America that grows in rich woodland soils with adequate moisture. It can also be found on sandy stream edges and ledges.

This plant has multiple stems and its bark is thin and are brownish-gray and reddish-brown in color and have horizontal lenticels. It has warty corky ridges and the trunks are larger. Twigs are lighter in weight and brown in color which are covered with fine hair and have U-shaped leaf scars.

Flowers appear in the spring in terminal compound clusters and each stalk of the flower is ¼ to ½ in width, has 4 to 5 narrow greenish-white colored hairy petals and there are 4 to 5 stamens present on the male flowers. Its sepals are much shorter than the petals. Most of the flowers have an unpleasant odor.

Its leaves are alternate and there are three leaflets on a leaf stalk. The leaflets are ovate and elliptically shaped with 2 to 4 inches length. The terminal leaflet on a shirt stalk is shiny blue in color from above and pale colored from below. Its undersides are marked with gland dots which produce chemical making it an aromatic plant.

Fruits are round watery like papery samara and are two seeded. They are brown in color and get ripened in October and is held on the tree until the high winds shake them.

Its wood is yellowish brown in color, hard, heavy and satiny.

What are the Medicinal Uses of Ptelea Trifoliata?

What are the Therapeutic Uses of Ptelea Trifoliata?

Ptelea Trifoliata increases the appetite by maintaining the pitta dosha in the body. It also relieves heartburn, anorexia and neutralizes the acid formation in the stomach.

This herb acts as an antipyretic that treats intermittent fever and body aches. Most of the antipyreticsandantibiotics are used to treat fever but they have many side effects. This herb is a natural antibiotic thus,kills the bacteria and other symptoms related to fever. It also treats malarial fever.

Ptelea Trifoliata treats bronchitis which is a viral infection in which there are symptoms like shortness of breath, coughing, etc. It reduces the cough reflex which loosens the mucus and opens the channels so that the patientcan breathe more easily.

This herb acts as an anthelmintic that works by stopping the roundworms production and the cells of the roundworms loses their energy and die quickly. It also treats symptoms like abdominal pain, nausea, vomiting, etc.

This herb acts as a body tonic that provides essential nutrients to the body and gives proper strength. It also boosts up the immune system that prevents the body from infections. Being an energy tonic it also eliminates fatigue and supports the functioning of body organs.

Ptelea Trifoliata slows down the progression of rheumatoid arthritis. This herb prevents the degeneration of joints and also prevents the tissues from permanent damage. It acts as a natural anti-inflammatory herb which reduces the inflammation and thus reduces the pain.