Hearing loss significantly affects one’s quality of life and their social and emotional growth. Although hearing loss is common and occurs gradually as one gets older, it could also be due to structural and functional abnormalities of the ear and the nervous connections behind the ear responsible for the complete mechanism of hearing and sound processing. Abnormal hearing could be present at birth which can be difficult to recognize in newborns and babies. Brainstem evoked response audiometry (BERA) test is useful in determining various aspects of hearing loss in babies and otherwise impaired adults. Yoga practices and Ayurvedic remedies to strengthen hearing have been discussed in this article. 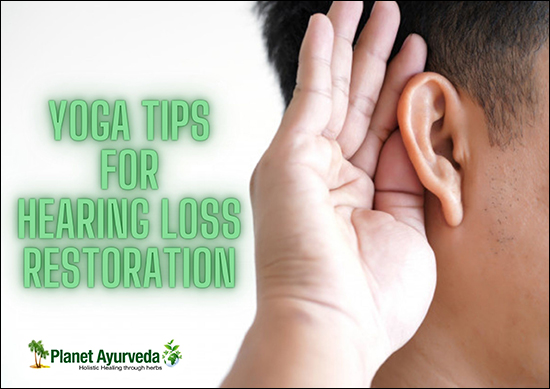 Our social and personal life depends greatly on how developed our communication skills are, and communication skill development depends greatly on speech and hearing. Hearing defects present at birth could impair a child’s growth and cognitive development. But any abnormality detected earlier in life can be restored effectively so that growth and development is not compromised, the sooner the better. Before moving on to the diagnostic procedures and restorative and preventive practices, let us understand how hearing works in humans.

The Mechanism of Hearing

Our ear is a complex organ with most of its mechanism hidden inside the head and only a little of it visible to us from outside. We shall look at it by first dividing it into three parts. The outer one-third is called the ‘outer ear’, which is shaped like a cone so that the sound waves falling on it can converge and fall inside for further processing. The central one-third is called the ‘middle ear’, consisting of small musculoskeletal structures: the eardrum, on which the converged sound waves fall; and the malleus, the stapes and the incus. They together amplify these waves, and then send them further inside. The innermost one-third part is the ‘inner ear’, which is also called cochlea. The cochlea has nerve cells on its inner end. Thin hairy structures are joined to these nerve cells whose function is to convert sound waves into electrical signals in raw form, which are again understood by the brain in the form of sound.

Partial or complete inability of any of the organs responsible in the mechanism of hearing is called hearing loss. It could be mild, so much that it could go unnoticed, or it could also be proceeding towards permanent loss i.e. deafness. Hearing loss can be contributed to by degenerative changes, which means that some degree of loss of hearing is considered normal in the elderly. Depending on which part of the ear is not functioning normally, hearing loss is studied as any of the following three types:

Sensorineural hearing loss could occur when the inner ear has been damaged, which mostly occurs in the long-term due to exposure to loud, continuous noises. However, accumulation of earwax also contributes to impaired hearing. Conductive hearing loss could be caused by an infection, or a perforation in the eardrum due to a sharp object, or sudden loud noises (such as those of fireworks), or sudden and significant changes in ambient air pressure. Growth of bones or tumors in the outer or middle ear can also adversely affect hearing.

We can easily tell when we require an eye sight test, but we may not be able to realize the requirement of getting our ears tested for hearing because hearing loss is gradual. However, some signs like not being able to differentiate talk from background noise and feeling the need to raise TV volume even when no one else feels so, tell that one has a problematic hearing. Adults should get hearing tests regularly, like once every ten years until their mid-40s and then more frequently.

Adults can take normal hearing tests where they have to tell what they heard over a series of sounds and words played into each ear in a sound-proof room, but what about children and babies, and most importantly, infants and newborns? Hearing is crucial in the cognitive and communicative development of a child; therefore each infant should be tested for proper hearing. More developed tests are done for testing hearing in newborns and babies. Such a test is the BERA test.

B.E.R.A., which expands to brainstem evoked response audiometry, is a form of hearing test that is done on children usually younger than 7. Because the baby cannot itself tell if its brain is satisfactorily receiving and processing sound signals, the tests used for testing hearing in adults cannot be used for babies. Unlike other hearing tests that rely on the individual’s verbal response, the BERA test uses the responses originating from those parts of the child’s nervous system that are concerned with the sense of hearing. It can be performed for newborns as a confirmation for their general wellbeing, or for babies and infants if parents think they have a problem in hearing.

It is suggested that hearing loss tests be done for children early in life because hearing is an extremely important factor of the child’s development of speech, expression, cognition and mental health. If the nerve responsible for conveying sound signals from the outside to the brain is working fine in terms of clarity and speed, hearing is considered healthy or normal. The BERA test can provide information about the following parameters:

It has been found out in a twenty-two month long study that the BERA test is highly effective in finding out which part of the ear is responsible for the faulty hearing mechanism. It also finds out if there is any injury, damage or inflammation near the pons and the cerebellum. This study suggests that the BERA test should be used by more ENT specialists since it can also detect neurologic conditions in addition to faulty hearing. [1] It is especially recommended for patients who are physically or mentally unable to take part in regular hearing tests.

We know that general flexibility and fitness can be boosted by practicing yoga exercises, but what is not commonly known is that yoga has the most systematic approach towards managing and preventing sensory and neurological conditions. Hearing is an example of such conditions where the external organ is of lesser importance in the whole mechanism, and the nervous system has a greater role to play. The following exercises are recommended to be practiced in the same sequence as they are mentioned in:

‘The Triangle Pose’: this pose enhances blood circulation and forms the basis of all nerve-strengthening exercises. It is a mild but effective practice for restoring neurosensory disorders.

‘The Tiger Pose’: Known as the tiger pose, this is a dynamic exercise. This shall balance the chemical and physical processes of both the cerebral hemispheres.

‘The Lotus Pose’: Padmasana has been used by yogis since ages to enhance functioning of the nervous system.

‘The Lord of the Dancers Pose’: named after lord Shiva, the king of all the dancers, this is an advanced pose and is extremely beneficial for balancing the nervous and physical equilibrium. It is beneficial for all neurosensory disorders.

‘Humming Bee Breath’: this humming bee practice stimulates normal and healthy functioning of the brain and the spinal cord. It is not only a great restorative practice for hearing, but also a great practice for entering meditation.

‘Yogic Sleep’: A relaxation meditation, the Yoga Nidra is also known as ‘yogic sleep’ where the body is reenergized as it is in actual sleep, in much less time. It is actually more beneficial than an actual sleep. It should be guided for non-adepts. It is done by first practicing Shavasana.

Sometimes, when the condition of an individual doesn’t allow them to perform any other yoga practices such as asana or Pranayama, Yoga Nidra is the only safe and feasible treatment for a patient.

Planet Ayurveda manufactures pure herbal formulations that are used as medications and tonics worldwide. These formulations are carefully sourced from authentic texts on Ayurveda written in ancient India thousands of years ago. The formulations are chemical free and additive free and thus safe for consumption by people of all ages and individual conditions. The products are suitable for people with all dietary preferences and restrictions since these are completely plant-based, halal and completely organic. A combination has been created by experts at Planet Ayurveda for ayurvedic management of hearing loss.

Advanced tests like the BERA can detect even the mildest of hearing losses not only for children but also for adults. Hearing may not be completely restored but it can be greatly improved with yoga and Ayurveda. The herbs described here are safe for everyone. The yoga practices mentioned here have been mentioned keeping in mind their efficacy and safety of practice for everyone regardless of their age, gender, and the condition of their health (or disease). However, any routine should be begun after due consultation with a competent yoga therapist. In case of severe disability, the yoga therapist may add, remove or modify some practices. These practices shall not only help manage but also prevent hearing loss in the long term.