Management of PCOD With Yoga

PCOD or poly-cystic ovarian disorder is a disorder that has evolved within the last hundred years. That it wasn’t known before the 1900’s is a sign that it is a lifestyle disorder and can be managed with yoga practices. In PCOD, ovaries, the female reproductive glands, show abnormal growth of cysts, disturbing normal functioning of the entire reproductive system. Hormones are secreted abnormally and male characteristics such as facial & body hair appear. The imbalance of female hormones causes deviation of the body from natural feminine shape accompanied by unwanted weight gain. Symptoms, complications, related conditions, triggers and management tips, and why and how yoga can be the ideal therapy for PCOD has been discussed in this article. 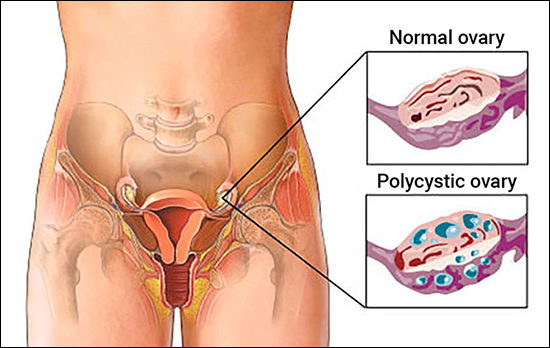 PCOD is a disorder of the female reproductive system. Its origin lies in the disordered growth of female glands, the ovaries, that contain countless immature egg cells, and release one of them each month when normal. In case of a malfunction, the cells aren’t released or fully matured and they keep sitting in the ovaries or the tubes connecting them to the uterus until they die and become cysts. Hence the name poly-cystic ovarian disorder. It adversely affects the mental health of a woman and needs to be treated with due care taken for the mental component as well as the physical component of the disorder.

Although their reproductive systems confuse women by sending mixed signals at ovulation, menstruation and even at the beginning of a pregnancy, some distinct signs that point towards a disorder and require attention are:

It can’t be emphasized enough that one’s mental state has great control of their hormones, and in turn, body functions. A diet deficient in nutrients is also a key controller of how the body functions. Lack of physical activity puts excess load on metabolism, further complicating things upto cellular level.

The following tips are not beneficial for everyone with any or all symptoms of a disorder relating to the reproductive system.

Yoga helps minimize PCOD by hitting at the origin: it targets the glands that secrete female reproductive hormones. Following exercises require a mat or a folded blanket and need to be performed on an empty stomach, or at least three hours after having a medium-sized meal.

Paschimottanasana means ‘the pose of stretched back’, or it is also called forward seated bend. This asana improves blood circulation in the pelvis and supports hormone secretion.

Setu is the term for a bridge. This pose, known as the bridge pose, is an excellent exercise specially prescribed for all uterine disorders.

Popularly known as the cat pose, this pose is a combination of two poses where one’s back is hunched up and then dipped down. This exercise not only comforts PCOD symptoms, but also lessens the chances and degree of backache developing during ovulation.

shashanka means rabbit; hence this pose is ‘the pose of the rabbit’. Shashankasana is a relaxation asana as well as a strengthening one. It targets all reproductive organs and stimulates regular hormone secretion.

Popularly known as ‘the plough pose’, the final position of this pose makes you look like a wooden plough. It will bring down blood circulation from the thighs and collect it in the pelvis, and eventually help restore normal ovaries.

PCOD starts in the reproductive system but ends up disturbing the normal processes of the whole body of the woman going through it. That the causes of PCOD are not known doesn’t mean that it can’t be managed. PCOD is not deadly and it doesn’t always complicate itself if you are willing to make changes in your lifestyle. It can be managed very well with lifestyle modifications and specific yoga practices.
Share On