What are the Practical Uses and Health Benefits Lily of the valley (Convallaria majalis)? 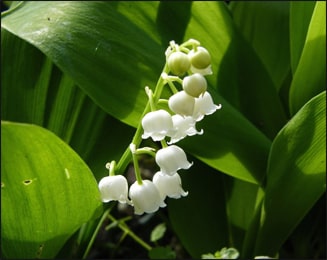 What is Lily of the valley?

Lily of the valley, scientifically known as Convallaria majalis is a plant with sweet-scented fragrance which is native to the northern hemisphere in Europe and Asia. It is commonly known by other names like May bells, Mary's tears and Our lady's tears. The Genus Convallaria consist of only one specie which is Lily of the valley. Many flower perfumes imitate its fragrance and are named after its French name, i.e. muguet. They are supposed to symbolize, happiness and better vision of a world. It is said that this plant was given to the great healer Aesculapius by the Sun God Apollo.

Lily of the Valley is an herbaceous plant which grows extensively to form colonies and stems spread underground. It grows to height 8-12 inch tall. In summers new shoots spread underground through horizontal connections called stolons. In spring it grows into new shoots which remain interconnected through stolons. Its stems grow up to 15-30 cm of height and leaves are 10-20 cm in length. Flowers of the Lily have six sepals and form a bell shape by fusing at the base. It flowers blossoms in late spring and early winters and also in early March. Red-berry is its fruit which measures 5-6mm in diameter and contains seeds of white or brown color.

It is native of Europe except for some margins of Atlanta and Mediterranean. Some of its variety exists in the Eastern United States. It can reproduce both sexually and asexually by means of vegetation and seed formed by the fusion of gametes respectively.

Flowers of Lily of the valley are fragrant so it is grown in gardens for its scented flowers. In shady locations, it covers the ground and gives a good view of the garden. It can form large colonies in favourable conditions.

It consists of approximately 38 cardiac glycosides and is known to be very poisonous. Lily of the valley consists of saponins. It is poisonous but still is used by many herbalists as a restricted remedy for various purposes. It consists of two glycosides Convallarin and Convallamarin. These glycosides have a purgative and diuretic action. This plant also contains flavonoids, malic acid, and citric acid.

Practical Uses of Lily of The Valley