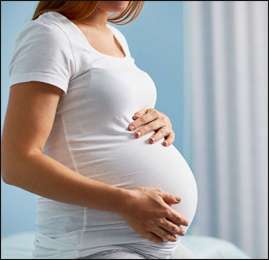 Pregnancy is the most crucial, happy and joyous time of life for many women. At the same time, this time is also challenging for women as the mother's body goes through numerous changes in order to support and create the development of new life.

According to Ayurveda, the process of childbirth can be compared to the growth and development of a healthy tree. Using this analogy in childbirth, the sperm and the ovum can be considered as seeds, uterus resembles soil, which should be nurtured by the nourishing fluids (Ambu) and finally the Ritu (season).

But now-a-days, there is an increase in the incidence of the disorders related to the female reproductive system because of changes in lifestyle which lead to an imbalance in doshas.

In Ayurveda, it is stated that the reproductive phase in women's life is governed by Pitta and Vata dosha and any imbalance in these doshas will lead to abnormalities. This can be explained in terms of menstrual irregularities, hormonal imbalances, failure to conceive etc.

There is a need for an effective remedy to provide her better health throughout different phases of her life. Shatavari is such an herb which is very effective in enhancing female fertility and is actually considered very effective for women's health. It is a widely used herb for conception and lactation. Shatavari may be translated as "100 spouses", implying its role in fertility and vitality.

Shatavari (Asparagus racemosus) is one of the well-known drugs in Ayurveda. It is considered as both general tonics as well as a female reproductive tonic. This herb is considered as the rejuvenating tonic for the females of all age groups. It provides strength to the body due to its unctuous nature, hence it is known as Balya or strength promoting herb.

In our ancient Ayurvedic texts, it is regarded as one of the most important Rasayanas. The Rasayanas promote the general well-being of the body by supporting immunity, vitality and liveliness of the mind, body and soul.

Meaning: According to this shloka, shatavari is cold in potency, bitter in taste, undergoes sweet taste conversion after digestion, pacify Vata and Pitta doshas, aphrodisiac, rejuvenating in nature, good for memory, increases quality and quantity of sperm count, increases intelligence, good for heart, cold in potency, useful in hemorrhoids, diseases related to colon and eyes.

1. Acts as a Female Tonic

The regular use of herb Shatavari moistens the dry tissues of female reproductive organs, increases libido, reduces the inflammation of sexual organs and enhances ovulation.

Apana Vata, one of the subdoshas of Vata dosha is the downward flow of energy in the body and it should not be too strong or too weak.

Shatavari herb possesses phyto-chemicals and other compounds known as saponins, oligosaccharides, amino acids, sulphur containing acids that make it a beneficial herb for women who want to get pregnant.

Hormones should be in a balanced state to achieve fertility.

In Ayurveda, immunity is strongly linked to a substance called ojas. Ojas is the essence part of all the dhatus and the super fine essence of shukra dhatu (reproductive tissue).

Thus, Shatavari helps in preparing the women for conception by reinvigorating and strengthening the tissues and finally the body is rejuvenated to produce Ojas, which is the healthy essence of all the seven dhatus.

Planet Ayurveda manufactures Shatavari Capsules which contain the standardized extract of the root of Asparagus racemosus herb. Shatavari Capsules contain the goodness of this herb. These capsules are free from artificial colours, preservatives or chemicals. They are easy to use veggie capsule formulations that are safe to use.

Dose: 1-2 capsules to be taken twice daily with plain water after taking meals.