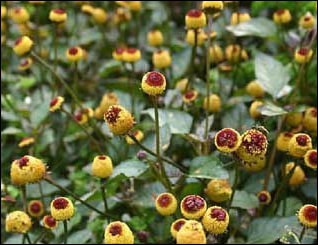 Akarkara belongs to Asteraceae family of plants and its botanical name is Anacyclus pyrethrum. It is an herb with many medicinal uses. Apart from Ayurveda, it is used by other alternative systems of medicine like Unani and Homeopathy.

The herb is mostly known and famous for its aphrodisiac effect on the body and helps in the detoxification of excess wastes and fluids from the body.

Most beneficial and useful part of plant is the root which is medicinally used in the form of dried powder.

It is a perennial plant that is common to the Indian subcontinent. Arabian countries and Spain are among its other growing areas.

The alkyl amides are responsible for its aphrodisiac and neuro - protective properties.

Anacyclus Pyrethrum pacifies Kapha and Vata doshas and is believed to be a very effective natural stimulant of the immune system.

It has a unique property by which it can improve speech problems in growing children. Vacha (Acorus Calamus) is another herb which can be used in its combination with Akarkara (Anacyclus pyrethrum).

COMMON PROPERTIES OF THE HERB

A WORD OF CAUTION

Care should be taken if one is suffering from problems of gastric ulceration, acidity and intestinal inflammation in any form.

It is not safe during pregnancy and breast feeding.

Higher doses and long term use should be highly managed under the supervision of an Ayurvedic physician.

Akarkara root powder, dosage is variable from 125 mg to as high as 1 g.

We use cookies to ensure that we give you the best experience on our website. If you continue to use this site we will assume that you are happy with it.I AgreePrivacy policy