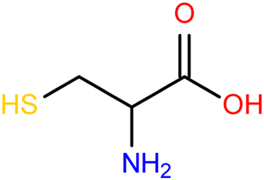 Cysteine is an amino acid which can be synthesized in the body or it may be consumed through diet. It is a building block of proteins. It is an important amino acid formed in the body which is made from the methionine in the presence of vitamin B6. When it is taken in the form of supplement then it is formed in the form of N-Acetyl Cysteine (NAC). After entering into the body, it gets converted into glutathione which is a powerful antioxidant. Antioxidants are needed to prevent oxidation due to free radicals and antioxidants fight against free radicals which are harmful compounds in the body that result in cell wall damage and DNA damage. Free radicals are also responsible for number of health complications like heart disease, cancer.

Cysteine can be synthesized in the body or can be taken through food. It enters the body in two ways-first through food containing cysteine and second through a metabolic pathway in which amino acid methionine converts into S-adenosyl methionine to the homocysteine then reacts with serine and results in the formation of cysteine.

The main food sources of cysteine are given below :

Cysteine has various physiological functions. It is good source of sulphur in body which helps in metabolism. It is classified as non-essential amino acid but it may be essential for infants.

It is important precursor of glutathione which is good antioxidant that prevents the cells from toxins such as free radicals. Glutathione is made up of three amino acids - cysteine, glycine and glutamate. Sometimes it acts as master antioxidant in body.

Major functions of fatty acids are listed below :

In some cases there are possible side effects such as nausea, vomiting or constipation. When it is used as inhaled medicine there are side effects that may include a running nose, mouth swelling, drowsiness and feeling tightness in the chest.

Cysteine is not recommended for infants. For children and adolescents, it can be used under only physician guidance.

For general health 220 mg of cysteine can be taken twice or thrice in a day.