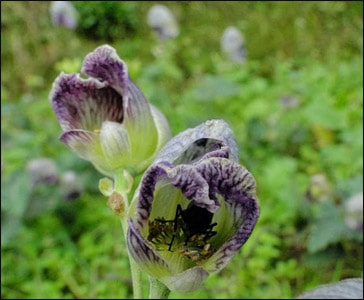 Ativisha grows in colder parts of India. It is abundant in the alpine regions growing up to a height of 2000 feet above sea level. The roots of the plant are the source of most of the alkaloids obtained from the plant such as aconitine, atisine, heterophyllin, heterophyllisin etc.

Roots of the plant are paired and tuberous. They may be white or grey in color. Stem is simple or branched, growing up to a height of about 15 to 20 cm. Leaves are heteromorophous and glabrous. The flowers usually occur as inflorescence which may be white or violet in color. Seeds may be pyramidal, blackish or brownish in color.

Ativisha is the ayurvedic name of an herb known as "atis" in Hindi. It is extensively discussed in the ancient ayurvedic texts written by Charaka and Sushruta.

This herb is one of the most effective herb for digestive problems in children. It has a carminative action and is superb for the maintenance of a healthy digestive system. Ativisha means one that is toxic but in spite of the toxic properties, Ativisha is considered as one of the best medicinal herbs in Ayurveda.

The Latin name of this plant is Aconitum heterophyllum and it belongs to Ranunculaceae family.

The list of alkaloids found in the plant is:-

Ativisha has an anti-toxic effect on the body. It helps to balance all three doshas in the body especially the kapha and pitta.

As per Charaka Samhita, Sutra Sthana chapter - 25, Ativisha or Atis is the best herb for digestion, carminative action, absorbing and Tridosha balancing properties.

A Word of Caution

Atis can induce severe vomiting, tremors and dryness of mouth if overused. It is best to avoid its use during pregnancy and lactation.

Root tubers are the most commonly used part of this plant for medicinal purpose.