Red inked your clothes since puberty, you track it right to check if you're healthy and of course you undergo many roller coasters of physical and mental stations on around every next parallel day of the cycle. Periods being a woman exclusive event, has that much of importance in her life and so much of facts related to it. In fact, educating oneself on women’s menstruation or periods has become a necessity by now. This wide arena includes many aspects that could be different from person to person. Aspects like period cramps and related physical changes, irregular periods, altered blood flow rate, sanitary methods, hormonal changes related to menstruations, mental distress are discussed both socially and medically. Also, it’s to be addressed that our society has come a long way to this state where people are bothered about their menstruation health. 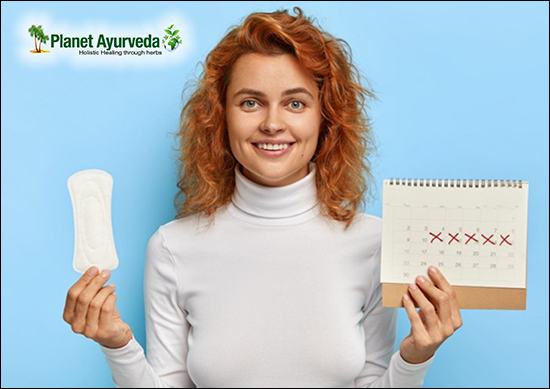 Menarche, known as Rajopravati in Ayurveda is called the onset of menstruation in females that is acquired during adolescence is followed by menstrual cycles later on till the vaginal bleeding stops. The stoppage of the menstrual cycle is called Menopause, known as Rajanovritti in Ayurveda. It is said that a period is when you get to have a natural detox to your body and get your reproductive blood bank purified. A woman with a menstrual cycle is said to be Ritumati, i.e., reproductively active and the time between menarche and menopause is called the Ritukala (fertile period).

According to Ayurveda, everything revolves around the Tridosha theory, the theory of 3 humours- Vata, Pitta and Kapha. Vata is said to be the predominant dosa liable for the menstruation flow and definitely getting your Vata doshas at normal rates is so important. Also, Rakta dhathu plays an important role as well. There could be many factors gathered together to form healthy menstruation criteria and one of the main situations which is being discussed widely and to be tackled by many menstruating women is their menstrual cramps or the associated pelvic pain. Menstrual cramps or sometimes certain body pain might even start a few days before the onset of your periods. But usually they start along with your bleeding only. Is this sane or just common? Well, varied rates of period cramps called dysmenorrhea are very common. But similarly, there could be varied reasons for this as well. And according to Ayurveda, It’s always better to prevent cramps and try to make your menstruation less painful. Basically, this is throbbing pain experienced as a result of uterine contractions to throw off the dead cells within it. It is also attributed to low oxygen supply to the blood vessels due to heavy uterine contractions. The fact that this abdominal pain might radiate to lower limbs makes it even more exhausting. Few important scientific conclusions on reasons that might cause menstrual cramps are discussed below:

To look into this in detail, it's necessary to know primary and secondary dysmenorrhea.

Ayurveda Comes With Solution As Well

Remedies, especially home remedies are the basic attractions of Ayurveda as it is feasible and often handy. Few of them include:

Other than period cramps there could be problems like acne formation during certain stages of one’s menstrual cycle, emotional stress like anger issues, mood swings and depression, associated body pain, sudden food cravings, excessive thirst, smelly sweat, abdominal bloating, excessive sleep, smelling blood and the list continues. Changing your lifestyle according to the Ayurvedic principles is the only solution you might need to forget all your troubles during that time in your month. Following Dinacharya and Ritucharyas in Ayurveda is simple to do while permanently effective. According to these, doing light yoga, and following the Ritumati charyas would help you survive menstruation without even actually surviving but surpassing casually.

Ritumati charya is basically a certain regime to be followed by women while on periods or for menstruating women so as to maintain their menstrual health, according to Ayurveda.

As per Acharya Sushruta, a Ritucharya includes :

Have good healthy food and add ghee to your diet. Sleep on soft materials. Abstaining from sexual activities on the first 3 days is advisable during menstruation. Maintaining cleanliness throughout your periods is very important. It's important to give proper rest and sleep to your body. Sleeping during the day is not advisable. Do not do heavy exercising. Stay away from external stresses like even loud sounds. Avoid heavy massages to the body. Sex during periods would be better to be avoided. Avoid giving even the slightest physical stress to your body like tying your hair tightly or doing activities that demand physical strength.

Though many women worldwide suffer from varieties of menstrual disturbances, Ayurveda has many options to serve your uterus with a healthy lifestyle and a bunch of remedies. Ayurveda and its herbs will help you get your hormonal alignment right and also to cope up with its effects mentioned above. Every woman deserves better menstrual health and a good time bleeding. Let’s choose Ayurveda, the body friendly and natural way of lifestyle to maintain our mental and physical rhythms balanced on your menstruation from this moment. Let you bleed healthy women!