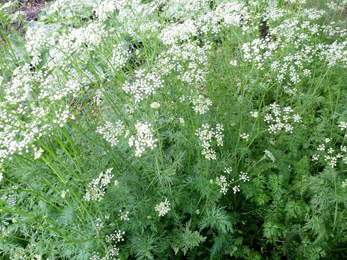 Cumin (Cuminum cyminum) is a small annual herb which grows up to 30-50 cm in height. Its leaves are alternate, compound, filiform segment, with sheeting bases. The flowers are small white, found in compound umbels or umbrella-like clusters. The flowers have both male and female structures together and an inferior ovary that develops into a very characteristic fruit called a cremocarp. Fruits are greenish, turns grey when ripe, tapering towards both ends, covered with papillose hairs. Though these grain-like fruits are called the seeds, the true seeds are within them and come out only during germination through disintegration of the fruit wall.

Cumin seeds resemble caraway seeds, being oblong in shape, longitudinally ridged and yellow-brown in colour, like other members of the Umbelliferae family such as caraway, parsley and dill.

The common chemical constituents of cumin are Cuminaldehyde, cymene and terpenoids. It contains 2- 4% of volatile oil called cumin oil.

The seeds has effective properties like carminative, aromatic, stomachic (good for stomach), stimulative and astringent. It is cooling in nature. Cumin is known as Jeeraka in Sanskrit which is derived from Jeerna means digestion. So Jeerak means digestive and it helps in digestive tract disorders.

As per Ayurveda, jeeraka or Jeera as having a bitter taste with a hot property, it is capable of removing vāta and kapha doṣas but causing pitta. It is dry, astringent, appetizing, digestive, strengthening, and light for digestion, good for the eyes and an aphrodisiac. It is used in the treatment of different diseases like indigestion, dysentery, enlarged spleen, flatulence and vomiting.

Cultivation of cumin needs hot Climate to grow around 30 c temperature. It is native to mainly in Egypt, India, Mexico, and North Africa, China.

It is Kaphavatahara that helps to pacifying the vitiated kapha and Vata doshas and increases pitta dosha in body.

It states that there are various synonym of jeerak are safed jeera, sayah jeera, jeerak, jaran, ajaji, kana or deeraghjeerak.

Planet Ayurveda Products that Use this Herb

Cuminum Cyminum is very useful in formulation of various Ayurvedic Preparations. Some of the preparation are given below:-

It is useful in alleviating distension of abdomen, pain abdomen due to gas and acidity.

It is useful to restore digestive fire to optimum level.

It is useful in chronic alcoholism as traditional anti-hangover remedy.

It is used to sharpen brain and increase memory.