How Curcumin works in Cancer Treatment? 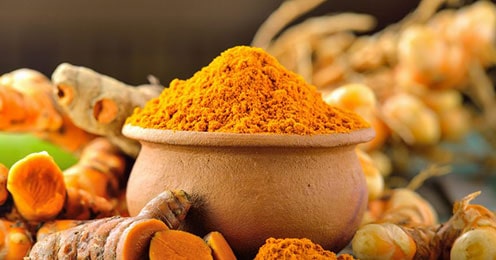 Curcumin (diferuloyl methane) is the main biologically active compound of Turmeric (Haldi, Indian saffron), which is a rhizomatous household spice that belongs to the 'ginger' family.

In ancient medicine, Turmeric - which gets its 'yellowish' colour due to the presence of Curcumin -- was widely used as an effective natural remedy for treating several diseases, because it is considered to be an excellent anti-diarrheal, carminative, purifying, hemostyptic and hepatoprotective agent. In particular, Turmeric is widely believed to have anti-inflammatory properties that are helpful in managing Arthritic conditions, along with the ability to improve the effects of Diabetes medications and lower the risks of developing insulin resistance, prevent liver diseases by increasing bile production, heal wounds and treat several skin disorders.

One of the most noteworthy health benefits of Turmeric is that it has the potential to prevent as well as treat Cancer.

According to laboratory studies of recent times, the use of Turmeric's Curcumin compound particularly can have a very beneficial effect for patients suffering from Cancer. Hence, Curcumin in different forms -- including Curcumin capsules or other Curcumin supplements -- is currently being tested in a number of clinical trials on Cancer.

Curcumin apparently has the ability to stop the division of cancer cells in the body and can combat a number of cancers, including lung cancer, liver cancer, stomach cancer, colon cancer, breast cancer, prostate cancer, bowel cancer, pancreas cancer and skin cancer.

Studies have revealed that Curcumin can potentially trigger 'programmed cell death' (Apoptosis), which enables the body to get rid of damaged cells in a natural manner. The findings of a 2011 study have particularly shown that Curcumin extract can effectively activate cancer cell death by differentiating between cancer cells and normal cells.

How it helps in Cancer Treatment?

Research has shown that Curcumin can work as a very effective treatment for different types of Cancer, although some more clinical trials in humans are still required. Curcumin is believed to show promising results in cancer treatment, with an international laboratory study conducted in 2013 revealing that the effects of a combined treatment with 'Curcumin and chemotherapy' had better results in treating cancer, as compared to the use of chemotherapy alone.

Moreover, it has also been found by researchers that the rates of occurrence of certain types of cancer is lower in the countries where Turmeric or Curcumin is more widely used, in comparison to other countries. Specifically, the lower cancer rates are associated with the daily intake of 100-200mg (around 1-2 teaspoons) of Curcumin over long periods of time.

Curcumin is known to have anti-tumour, anti-cancer, antioxidant, anti-inflammatory and anti-mutagenic properties. It can reduce inflammation and discomfort associated with a wide range of infections and diseases, by blocking or suppressing NFkB (nuclear transcription factor kappa beta). Hence, Curcumin can work as a 'herbal aspirin' or 'herbal cortisone.'

In terms of the benefits of Curcumin in Cancer treatment, Curcumin basically interferes with the 'cellular signaling aspects' of the chronic disease, thereby stopping its development. Laboratory results linked to Curcumin have found that Curcumin is capable of free radical scavenging activity as well as inhibition of lipid peroxidation. Specifically, Curcumin has the potential capability to:

Curcumin can, simply speaking, slow down the transformation of cells from normal to tumor and is also helpful in preventing the development of additional blood supply, which is essential for the growth of cancer cell growth (angiogenesis).

Since the implications of experimental data highlight the significance of the use of Curcumin for treating several kinds of Cancer, modern-day medical practitioners are increasingly acknowledging the role of Curcumin in supplementing the conventional anti-cancer treatment. With Ayurveda and other forms of alternative medicines having already recognized the immense health benefits Curcumin since ancient times, Curcumin is now being increasingly considered a complementary alternate medicine for cancer care.

In terms of the use of Curcumin as an effective natural treatment of Cancer, the alternative medicines presently available for fighting cancer include Curcumin as a key component. In fact, Curcumin capsules and other supplements are recommended by Ayurveda practitioners to Cancer patients, in order to help them manage the disease in a safe and natural way.

One of the potent cancer-fighting Curcumin products is the 'Curcumin capsules' available from renowned herbal manufacturing company, Planet Ayurveda. These capsules are prepared from standardized extract of Turmeric and can effectively complement anti-cancer treatment. The use of these capsules is beneficial in managing cancer because of their proven ability to relieve inflammation, reduce cancer-related pain, complications, reduce the side-effects of radiotherapy and chemotherapy and prevent metastasis of cancer.

The use of Planet Ayurveda's Curcumin capsules is, therefore, beneficial in the three stages of cancer --- Promotion, Progression, and Metastasis. The positive effects of Curcumin at each stage of cancer is largely mediated through its ability to regulate diverse transcription factors, growth factors, protein kinases, inflammatory cytokines and other enzymes.

Overall, Curcumin is considered a potent medicine for treating cancer because researchers have found a number of different mechanisms of action for Curcumin. In particular, Curcumin can modulate nearly 700 of the human genes, positively modulate over 160 different physiological pathways, ensure the orderliness of the membranes of cells and affect signalling molecules.

Therefore, the use of Curcumin in the form of capsules or other supplements can modulate genetic activity and expression, and can thus destroy Cancer cells as well as promote healthy cell function. Hence, Curcumin is now being widely known for the ability to kill cancer cells, while leaving healthy cells unharmed.

Finally, according to research linked to the Benefits of Curcumin in treating Cancer, it has been found that "Curcumin exerts its biological influence through epigenetic modulation, a process that continues downstream staying one step ahead of adverse genetic influences."