What is the Effect of Multiple Sclerosis on Brain?

Multiple Sclerosis (MS) is a disease of brain and spinal cord. In this disorder, the immune system attacks the myelin (protective sheath) that covers the nerve fibres. As a result, there are communication problems arise between the brain and the rest of the body. 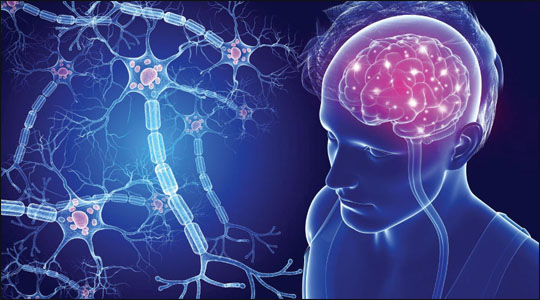 How it Affect the Brain?

Shrinkage or atrophy occurs with ageing due to the loss of neurons but brain shrinkage happens fast in people suffering from multiple sclerosis.

What are the Causes of Multiple Sclerosis?

Multiple Sclerosis is considered as an auto-immune disorder in which the body's immune system attacks its own tissues. The impaired immune system destroys the fatty substance that coats and protects the nerve fibres in the brain and spinal cord (myelin).

What are Symptoms of Multiple Sclerosis?

What is the Ayurvedic View of Multiple Sclerosis?

Ayurveda is a science of life which is concerned with the maintenance of health in a natural way as well as curing the diseases.

In Ayurveda, multiple sclerosis can be co-related to Snayusada or the aggravation of Vata in Snayu.

Meaning: In this shloka, the effects of increased Vata dosha are explained. Vata, when increases causes weakness in the body, black colored skin, there is a desire for hot things, tremors, bloating, fullness, distention of the abdomen, constipation, loss of strength, loss of sleep, loss of sensory functions, irrelevant speech, delusion, dizziness, giddiness, timidity are the symptoms of aggravated Vata dosha.

How Planet Ayurveda can help in the Treatment of Multiple Sclerosis?

The aim of Ayurvedic Treatment for Multiple Sclerosis is to improve the quality of patient's life and to reduce drug dependency.

Planet Ayurveda offers effective herbal remedies like Brahmi Capsules, Ashwagandha Capsules, Vrihat Vatchintamani Ras, Musli Strength & Atirasadi Churna for Multiple Sclerosis. These remedies subside the Vata dosha and at the same time do not aggravate the other doshas. They are aimed at slowing down or arresting the progress of illness. Unlike corticosteroids, these herbal remedies are 100% safe and effective.

Planet Ayurveda uses the standardized extract of Brahmi herb for the preparation of these capsules. Brahmi helps in the improvement in the cognitive functions of the nervous system. It helps to get rid of the symptoms of MS such as dizziness, fatigue and helps to improve attention span, memory etc.

Dose: 1-2 capsules twice daily, to be taken with plain water after taking meals.

Ashwagandha is a wonderful herb having so many health benefits. One of its health benefits is, that it corrects the response of the immune system and balances its functions as well. These capsules are very effective in MS as they prevent the progression of the disease by protecting the myelin sheath against the damage by the immune cells.

Dose: 1-2 capsules to be taken twice daily with plain water after meals.

Dose: 1 tablet twice or thrice a day with plain water after taking meals.