What are the Medicinal Properties of Digitalis Lanata (Grecian Foxglove)? 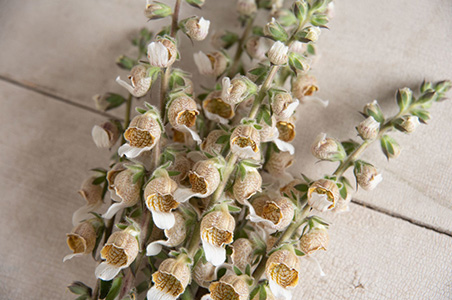 Ayurvedic herbs are an essential component of Ayurveda. Practitioners will usually use ayurvedic herbs for cleansing of the body, promote defense system against disease, and keep the body, mind, and spirit in balance.

Digitalis lanata is a species of foxglove usually known as woolly foxglove or Grecian foxglove. Digitalis lanata is poisonous in all parts of the plant like some other species of foxglove. Symptoms of digitalis poisoning include nausea, vomiting,  dilated pupils, severe headache, eyesight problems, and convulsions at the critical level of toxicity. In some cases, it is considered a noxious weed. Digitalis lanata found in leaf all year, in flower in month of June and July, and in early-mid September it is found in ripen seeds.

The plant generally grows from 0.3 to 0.6 meters in height or about 13 to 26 inches. The plant prefers partial shade and soil rich in humus. The plant also prefers loamy, sandy, and clay soils. It can also grow under dry or humid conditions.

Seeds grow in pods that have small hooks. These pods can be transported by using animal fur or clothing.

The elongated leaves are mid-green in color, woolly, veined, and wrapped with white hairs on the bottom. These leaves are very bitter in taste.

The flowers are tubular and bell-shaped. They are creamy white in color and purplish-brown in color. The flowers normally grow in the second year. Both flowers and stems are hairy.

The plant grows wild everywhere in Europe,whereas it is cultivated in India, Holland and North America.

The leaves are the medicinal part of the plant.

Digitalis leaf shows a narrow therapeutic index, So close medical supervision is required for safe use. Traditional dosage starts at 1.5 g of a leaf which is given as two divided doses in a day. Purified digoxin dose is 0.125 to 0.25 mg daily.

The chemical constituents present in Digitalis lanata  are:-

Digitalis lanata contains a powerful cardiac glycoside which possesses positive isotropic effects due to inhibition of sodium-potassium adenosine triphosphatase, which allows accumulation of calcium in myocytes which leads to enhanced cardiac contractility.  That may be used by patients with heart conditions.

Digoxin (digitalin) is extracted from Digitalis lanata. It is used to treat some heart diseases like atrial fibrillation. It reduces atrioventricular conduction so that the heartbeat slows down and slightly improves contraction power. Because of the improved circulation in congestive heart failure, the kidneys can work properly, which stimulates urine flow, and lowers the blood volume and reduces the load on the heart.

These drugs also have antiarrhythmic activity but at a higher dose, it will induce arrhythmias.

The cytotoxic properties of glycosides and flavonoids from Digitalis lantana and Digitalis purpurea shown by some In-vitro and screening studies. These show their activity against human cancer cell lines and solid tumor lines. The mechanism of Digitalis lanata against cancer includes direct cytotoxicity which results in apoptosis, inhibition of induction of nitric oxide synthase, inhibition of aflatoxin-induced cytotoxicity, and increases in the level of glutathione S-transferase.

Animal studies show the positive effects of Digitalis lanata on the lipid profile. Hyperglycemic and dyslipidemic rats showed enhanced glucose tolerance even after 2 hours of giving a single dose of the saponin digitonin to them.

In India, it is also used as an ointment that includes digitalis glycosides and is used to treat wounds and burns.

There is various interaction with digoxin and digitalis glycosides. The use of Digitalis lanata with some drugs shows negative effects that may be ranging from minor to life-threatening effects. The drugs with Digitalis lanata that cause minor effects are such as cimetidine, triamterene. Many of the life-threatening interactions occur as a result of increased digoxin serum levels or electrolyte disturbances when Digitalis lanata was given with some drugs like amiodarone, cyclosporine, macrolide and tetracycline antibiotics, propafenone, quinidine, verapamil, and diuretics.

All parts of this plant are toxic. Children have become unhealthy by engulfing the flowers or by eating seeds or leaves. It also becomes life-threatening among people who drank tea made from digitalis mistakenly. Although the bitter taste often prevents ingestion, and its emetic properties can produce vomiting, thereby this can limit the systemic absorption.

The accumulation and excretion of Digitalis glycosides are very slow therefore, intoxications during treatment are normal. Proper dosing guidelines and monitoring of the patient for safe use reduce the incidence of therapeutic overdose.