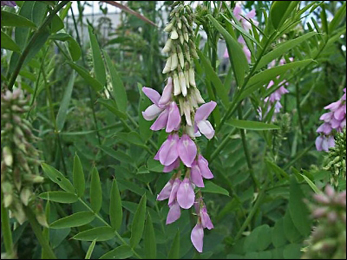 Goat's rue (Galega officinalis) is an herbaceous plant native to the Middle East. But now has been naturalized to Western Asia and Europe. In ancient folks, goat's rue has been narrated as a plant with high medicinal value and widely used a diuretic. It is widely cultivated as a green manure, a bee plant, a forage crop and an ornamental. It is widely cultivated as a cattle feed.

Goat's rue is also commonly known by other names such as galega, goat's-rue, French lilac, Italian Fitch, or professor-weed.

Goat's rue is widely seen in the temperate regions, especially in the European regions. It is a perennial herb that blooms in the summer months and are widely seen in grasslands, wetlands and riverbanks. It is also ranked as an invasive weed in many parts of the world. It may reach up to a height of 1 to 1.5 m. The stem is quite glabrous. The leaves are compound and consist of 6 to 8 small leaflets with lance shaped ends. The flowers are butterfly shaped. The color of the flower varies from white, pink or blue. The seed pod is long and when it is ripe, it bursts open, scattering the seeds all around. On bruising, the plant emits a disagreeable odor. This may be the reason for the name 'goat's rue'.

Dried flowers and dried aerial parts. Flowers are best collected during July to September. Flowers are then dried well and powdered. This is used in tinctures, infusions or powders.

Is it safe to use goat's rue for lactating mothers? This question is still under research and clinical trial. Studies show that goat's rue while used in dried form is found to be non-toxic and can act as a galactagogue. This herb is found to increase the breast milk of lactating mothers. Also goat's rue can build up and stimulate the growth of breast tissue.

Goat's rue always had shown drug interactions with diabetic drugs, anticoagulants and iron absorption in the body. In ancient times, it was believed that goat's rue is extremely beneficial for lactation. But the safety profile of goat's rue during pregnancy and lactation are still under clinical trials.

Goat's rue is considered to be lethal in fresh form. Hence it should be used after perfect drying.

Goat's rue preparations should be taken strictly under physicians' prescription in prescribed doses. Self-medication and over dosage is found to have serious ill effects. It may cause:-

The appropriate dose of this medicine varies from person to person depending on age, disease condition and health.

Classical Dosage:- 2 gms in an Infusion.

In bleeding conditions, the use of goat's rue makes the situation worse. Goat's rue may slow down the process of blood clotting.