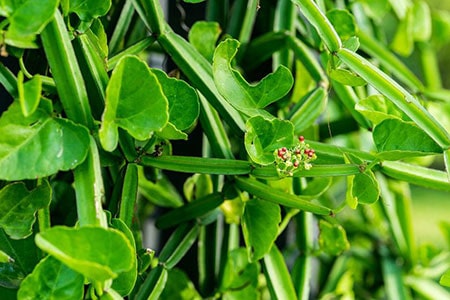 Cissus quadrangularis is commonly known as Hadjod is a perennial plant of the family Vitaceae. It is called as Adamant creeper, Square stalked vine, veldt grape, devil's backbone, adamant creeper, asthisamharaka, hadjod and pirandai, Sannalam, Nalleru,Vajravelli, Mangara valli. Hadjod plant is native to India, Bangladesh and Sri Lanka. It is also found in Africa and Southeast Asia. It is being imported to Brazil and the southern United States for its uses.

Cissus quadrangularis Plant reaches a height of 1.5 m and has quadrangular-sectioned branches with internodes of about 8 to 10 cm long and 1.2 to 1.5 cm wide. Along each angle is a Leathery edge. The Toothed trilobe leaves 2 to 5 cm wide appear at the nodes. Every Hadjod leaf has a tendril emerging from the opposite side of the node. Racemes of small white, or greenish flowers, globular berries that Hadjod plant bear is red when ripe.

Cissus quadrangularis is a succulent herb which belongs to a family, Vitaceae. It is fleshy, cactus in nature. It is also called as Vitis quadrangularis, Lycopodium imbricatum or Heliotropium indicum. Commonly also called as a HADJOD. In Ayurveda, it is used as Pachan dravya (digestive aid), Sara (relieves constipation), Athiyuk (strengthening bones), Vrushya (Aphrodisiac), etc. In Unani medicines, it is used to treat gastritis. The whole Hadjod plant is used in the treatment of asthma, powdered Hadjod root is specifically used in the treatment of bone fractures and bone related ailments. The dose of the Hadjod powder is 30-40 Leaves and young shoots are frequently taken with curry in Southern India and give a nice flavor.

In Chennai, its young shoots of the Hadjod plant are dried, powdered, burnt to ashes in a closed vessel. These ashes of this plant are administered in dyspepsia, indigestion and certain bowel complaints. Hadjod Leaves and young shoots are also considered as powerful alternatives in the gastrointestinal treatments. Juice of Hadjod stems is dropped into the ear in otorrhoea and into the nose in epistaxis. Hadjod plant has many therapeutic uses.

Cissus Quadrangularis or Bone Setter is called as Asthisamharaka (saves the bones from their destruction) in Sanskrit. It is have sweet and pungent in taste (Rasa), pungent after digestion (Vipaka), and is hot in effect (Virya).

Hadjod is rich in medicinal properties. Understanding of its properties will help us to better utilize this herb for medicinal purpose.

Below is given medicinal properties along with the meaning of this herb.