How To Stay Healthy In Rainy Season And How Ayurveda Helps In It?

Acharya has explained about ritus where they described about 6 ritu which includes shishir, vasant, grisham, varsha ,sharad, hemant. Ritucharya has two kaal - Adan kaal (includes shishir, vasant, grisham) Visarg kaal (includes varsha , sharad , hemant). Adan kaal here the stroke of heat is maximum which leads to ushana and tikshan blowing of air and low strength of individuals in this season, so this kaal is known as aagniye kaal. Visarg kaal where the sun stroke or heat stroke is less here cold breezes blow, which causes increase in body strength, more immunity as heat reduces in this season. Today we will discuss the rainy season in detail!! 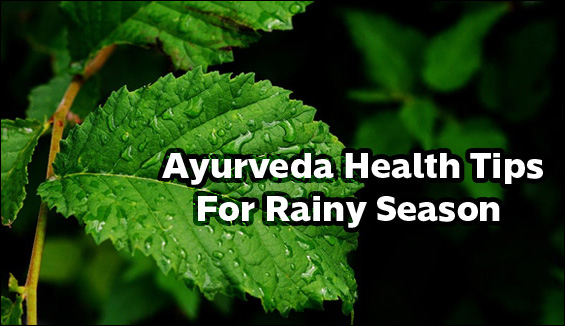 In ayurveda, the body consists of gunas (satvik, rajshik, tamsik) and doshas (vata, pitta, kapha) and in every season the body adapts itself in each and every season to remain healthy and fit. So one must adapt the food, beverages according to the season which is explained well by our acharyas. So Ritucharya explains about the routine which is required for maintaining hormones in our body to remain fit.We will discuss further about the food which is indicated and contraindicated in the rainy season which are described as belows in detail.

Varsha ritu is the first season of visarg kaal, which is followed by grishma ritu of adana kaal. As this ritu is followed by adana kaal in which there is low immunity, low strength, low digestion power so when this season is coming that causes vata dosha to initiate which causes low digestion . If proper care is not taken as more use of ahara which is amla, use of dirty water causes low immunity and low strength of a person. If this situation arises a person should take care and use agni vardhak ahara vihara.

With aggravation of vata dosha in the rainy season there is predominance of pitta dosha too. Due to poor digestive fire doshas start increasing which leads to many diseases. In this phase the moon is more powerful and the sun releases its strength to the people. This phase is dominated by clouds, rains so madhur, amla, laavan rasa should be taken.This is called as visarg kal. But in uttarayan kaal (againye kal) the sun and wind is very strong so it takes away all the cooling qualities. And this phase is dominated by fire.This season is between mid january to mid july. During the end of adana kaal and beginning of visarg kal weakness occurs in between varsha and grishma ritu. Strength remains moderate between shard and vasant ritu. Maximum strength is seen in hemant and shishir ritu.

Rainy Season As Per Ayurveda

In ayurveda ritucharya plays an important key role which leads to many diseases as there is change of time which changes the doshas. So the early diagnosis of the doshas is necessary. And the aim of ayurveda is to maintain the harmony of the vitiated doshas by proper lifestyle changes which balances the doshas. So following measures are given in ayurveda which must be followed by every one to maintain a healthy lifestyle.

Before this season arrives one must take panchakarma treatment (vaman virechan) as shodan proceeds one should undergo asthapana basti. The meal which is ate must be digested properly than only one should consume certain cereals, old madhu, arisht, mastu (thin layer of water on curd) old grains for food, soup of pulses, and certain juices. One must have pure water with proper boiling of water and then must have it. And when there are clouds one must have namkeen padarth, sour food which causes easy digestion of food.

VIHARA - On rainy seasons days one must not move bare feet on ground.One must use fragrance materials, flowers.

Ayurvedic Medicines Which Should Be Taken In Rainy Season

Ritucharya came from two words ritu=season, charya=regimen.It is defined as the regimen which is followed and practised according to season. As we discussed the effect of varsha ritu on individuals and about the indications and contraindications of ahara vihara during the rainy season. And we came to know about the home remedies during the rainy season.We discussed about the visarg kaal and uttarayan kaal which told about the agni karma and the strength of the digestion in each ritu. Common herbal medications are also discussed above which helps in immunity and better lifestyle.