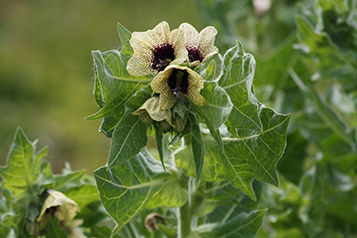 Parasika Yavani (Hyoscyamus niger) is an erect viscidly hairy, annual herb having nauseous odor growing 30-150 cm high. There are two forms of the plant, an annual and a biennial. The annual grows during the summer to a height of 30 to 60 cm (1 to 2 feet) and then flowers and sets seed. Biennial produces only a tuft of basal leaves during the first season, which get disappear in winter and leaves underground a thick fleshy root Flowering and Fruiting occurs April-September. Stem grows up to few meters high.

Flowers are funnel-shaped and bisexual, having dark yellowish green with dark purple (reticulation) in the center. The fruit is a capsulated with numerous black seeds.

Seeds are oval, kidney-shaped dark grey in color and about 1.5 mm diameter and it tastes bitter, mucilaginous and pungent.

The following spring, the plant produces a branched flowering stem, which is usually much taller and more vigorous than the flowering stems of the annual plants.

Parasika Yavani (Hyoscyamus niger) is a kind of weed, a plant that grows twice in year. It is herb that is hot in potency and digestive in nature. This herb is source of antihistaminic, antimicrobial, antispasmodic, analgesic, anti-inflammatory, anti-allergic, anodyne, astringent anthelmintic, anti-phlegmatic for productive cough, anti-spasmodic, digestive, hypnotic, mydriatic, sedative and stimulant.

The main chemical components are: Hyoscyamine, Atropine, Scopolamine and other compounds present in this herb are flavonoids, tannins, amines, albumin, calcium and potassium nitrate.

Parasika yavani is Native to Mediterranean region and Temperate Asia, it has spread in Europe, North Africa, W. Africa and N. Asia. Main source of Habitat is Baluchistan and Afghanistan. In Indian region it is found cultivated in West Himalayan regions from Kashmir to Khumau randomly in villages and roadsides at an altitudes of 1600-3500 m, else in Lahul and Kinnaur regions of Himachal Pradesh and also cultivated in Punjab, UP, Ajmer, Mumbai and Nilgiri.

The suitable soil for the sowing seeds of this plant has normally clay kind of properties with water absorbing capacity in it.

It balances Kapha and Vata Dosha, because of its hot potency. It increases Pitta.

It is also known by the name Khurasani Ajawayan. It's all qualities are like ajwain but it has a specialty that it is digestive, treats anorexia, sedative and is heavy to digest.

Hyoscyamus niger is herb has so many therapeutic properties aphrodisiac, hypnotic, anticholinergic, anodyne, analgesic, anti-inflammatory, anti-allergic, anthelmintic, anti-rheumatic, antiseptic, antispasmodic, astringent, carminative etc. and all these properties have made it useful in so many conditions of the body.

Parasika Yavani (Hyoscyamus Niger) is one of herb used in Tri Bull Oil.