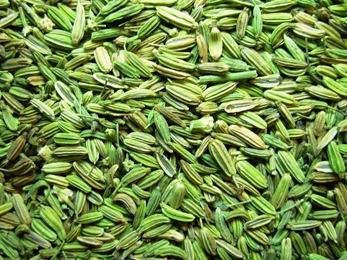 Foeniculum vulgare (Fennel) is also known as Saunf or Mishreya. This herb is used in ancient time to treat variety of ailments. Foeniculum vulgare is very old known name within the genus. Mishreya, the plant belongs to Umbelliferae family. This plant is used by humans for its flavour. This plant grows upright. It is perennial herb with feathery, soft and hair like foliages. This plant is erect, smooth and cylindrical with multiple branched leaves. The leaves are lacy type with swollen petioles that clasp the stalk to make an edible structure. The leaves grow up to 40 cm long and 0.5 mm wide. The edible structure form by them commonly known as bulb. This plant grows up to 2 ft. in its first season. Mishreya produces flowering stems that stand a foot and support showy flat-topped umbels of little golden flowers. The second season comes during July and August. The root is very elongated, has resemblance with carrot. It is a plant with fragrance. All parts have a sweet odour.

Foeniculum vulgare is a very sweet and aromatic plant, known to be used as kitchen spice. It is cultivated in various countries, but in India is mainly for its seeds. These are used to flavour bread, liqueurs, pastries and more. This plant has many names but in India it is commonly known as saunf.

This plant is of two main types. Here are these types - piperitum and vulgare. Piperitum has bitter seeds, while Vulgare has sweet seeds that can be used for flavouring. Sweet mishreya is similar to other one but has hard perennial that grows taller up to 6 ft. and does not produce swollen leaf base, bulb.

This plant is known to have antispasmodic, anti-inflammatory, analgesic, hepatoprotective, diuretic, antioxidant and anticancer activities.

The plant has many important active chemical constituents like anethole, the main ingredient of the mishreya. Other constituents are beta-myrcene, safrole, bitter fenchone, alpha pinene, limonene, estragiole, p-cymen and camphene.

Mishreya is the native of Mediterranean region like in North Africa, Europe and Western Asia. These are common in much of North America, Central America, Europe, Hawaii, Australia, Fiji, Queensland and Austria.

It states that this herb is known as chatra, shalya, shaleen, misreya, madhura and misi.

It is good for heart, constipation, worm infestation and weak digestive fire. It is dry, hot in potency and manages cough, vomiting and vata diseases.

Mishreya is known as oestrogenic agent. It helps to increase mensturation, milk secretion, libido, facilitates birth and male climacteric. The main components of Mishreya oil like anethole are known as active components.

It is known to act as free radical scavenger. It has anti-carcinogenic and anti-inflammatory effects.

Ferrula communis, giant fennel, contains coumarin are those derivatives of the plant that inhibits vitamin K and interfere with blood clotting.

Essential oil of the plant seeds has tendency to stimulate pancreatic alpha cells and secretion of insulin.

This formulation stimulates juices of liver, pancreas and intestines on time, cures acidity and gas problems of abdomen and relieves the abdomen pain. This is blend of various herbs. One of the important one is mishreya.

Detox tea balances all of three doshas. It maintains circulation, corrects metabolism. One of the herbs present in the detox tea is saunf.