Panchkarma is one of the methods of cleansing as per Ayurveda. By this method, the unwanted waste of the body is eliminated. The nervous system is considered one of the systems of the body which governs all the activities in the body. So if nervous health is not perfect then whole body functions get vitiated. According to Ayurveda the primary dosha responsible for regulating the Nervous system is the Vata dosha. So to maintain the health of the Nervous System it is a must to balance Vata dosha. The purpose of the article below is to provide you with information about what actual panchakarma is and how it is beneficial in maintaining the health of the Nervous System. 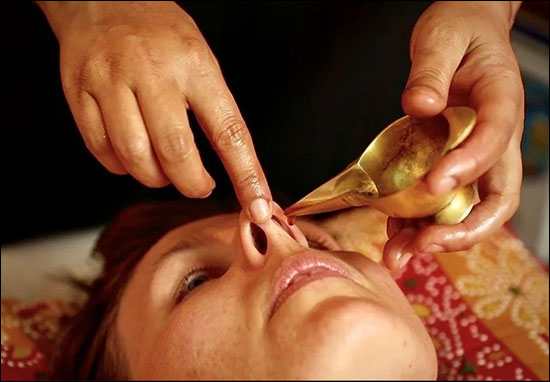 As discussed in the abstract, health of the Nervous System is all about balancing Vata dosha but it's not like that. All doshas of the body are responsible for maintaining their health. Yes, this is right that Vata dosha predominantly plays a role in keeping the nervous system healthy but the two others are also responsible as all these are interdependent on each other. Like when we eat, Vata dosha helps in the movement of food into the digestive tract. On the other hand, Kapha dosha provides lubrication to the food and at last pitta dosha assists digestion. The first symptom of Vata dosha imbalance is anxiety and if it remains unmanaged, further leads to chronic stress. So to stabilize the Nervous System the first aim of Ayurvedic management is to balance Vata dosha. In the further article let us know what panchakarma is and how these help in maintaining the health of the Nervous System.

There are 5 main procedures under panchakarma: Vamana, virechana, Nasya, Basti and raktamokshana. But there are several other procedures which come under Panchkarma and help in balancing tridosha in the body. Now let’s see the Panchakarma procedures that help in maintaining the health of the Nervous system.

Snehana Karma is defined as the therapy which provides mridhuta (softness), snigdhata (unctuousness), picchilata (smoothness) and dravatva (liquidity) to the body. The administration of senahana dravya (substance) to the body is one of the best treatments for Vata dosha. This karma is mentioned as purvakarma (pre-procedure) of panchakarma, that is this procedure is to do before doing the main panchakarma procedures.

In this karma medicated dravya is administered in the nostrils and this procedure is said to be best for all neurological disorders. This therapy stimulates the overall nervous system as well as cranial nerves. That’s why it is regarded as the best for managing the disorders related to five sense organs: the eyes, ears, nose, skin and tongue.

Benefits of Nasya Karma: Nasya Karma helps in stimulating the olfactory cortex, pituitary gland and hypothalamus. By providing a soothing effect to the brain it induces good sleep.

As we discussed earlier Vata dosha is the one which is mainly responsible for neurological health. Regulating Vata dosha Basti is one of the best treatments. Basti is considered as ardha chikitsa thus it can be given in almost all diseases. But this is regarded as best for vata vyadhi (neurological disorders).

Benefits of Basti: It consists of various properties such as Rasayana (rejuvenating), Brihmana (nourishing) Vrishya (Aphrodisiac).

The following are the most common procedures that are used for maintaining neurological health:

Panchkarma is one of the methods of cleansing as per Ayurveda. By this method, the unwanted waste of the body is eliminated. There are three doshas in the body that are vata, pitta and kapha and all these are interdependent on each other. So to keep our body healthy it is necessary to keep these three in a balanced state. Same is for the Nervous System health but mainly the dosha responsible for Nervous System health is vata dosha. As vata dosha aggravates it hampers the functioning of Nervous system and to maintain the health of Nervous System it is necessary to keep vata dosha in balance. And for this purpose Panchakarma is one of the best management companies. The various procedures of Panchakarma such as snehana, basti, nasya and various others have direct impact on vata dosha. So we can go through these procedures of Panchkarma to maintain the health of the Nervous system.