All herbs in Ayurveda are having different properties and actions on different diseases. In Ayurveda herbs or drugs are mentioned as dravya which is used to treat various ailments within the body. Our Acharya has described the herbs in a different manner; they have categorised effects of dravya, properties of dravya, uses of the dravya, and many more in Charak Samhita they have characterised fifty mahakashayas, according to each herb and their actions. Similarly, Acharya Sushruthave mentioned thirty-seven gannas in their Samhita according to their properties. In this article writing, we are going to discuss the herb named Mandukaparni. 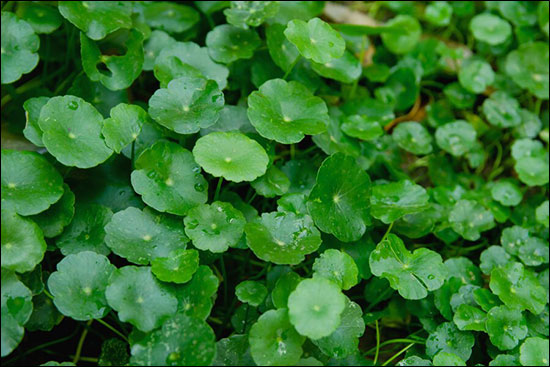 Gotu kola or mandukaparni has been used for thousands of years to treat various diseases, it is widely used in China, India, and Indonesia. This is widely used to combat wounds, mental illnesses, and various skin ailments like psoriasis, leprosy, etc. it can also be used in managing respiratory symptoms. In Chinese medicine, this herb is called the fountain of life. This is an Indian herb that is used for culinary and therapeutic purposes. It has been considered a brain tonic due to its beneficial neuroprotective properties.

Special Note About This Plant

This is a herbaceous perennial plant that Grows in temperate and tropical swampy areas in various parts of the world. The stems are slender in shape, green or reddish in colour, its nature is to connect other parts of the plant, it has long-stalked rounded in shape with palmately netted veins that have a smooth texture. This crop matures in three months and its whole is used for medicinal purposes so is harvested manually including its roots. This has been used in various disorders as well as in minor wounds, with confirmed safety. It can be successfully used for its internal and external applications.

Mandukaparni is a small trailing herb or perennial plant and is the only species of Centella found in India. Its roots are nodular and the stem is glabrous and strips are present that are of pink colour,  It has small fan-shaped green leaves that are fleshy, articulated, and dentate as well as reformed in structure. Its petioles are longer, and smoother on the upper part of the stem and on the bottom part it is hairy in structure. Its flowers are fascicled and umbels in pink and white colour. Its fruits are oblong, laterally compressed, and hard from the pericarp, thickened with dull brown and woody white in colour.

This plant is usually found in marshy places in tropical and subtropical regions all over the country, its founding soil is moist, fertile, and loose as well as clay-type soil.

This is found at the elevation of 2000 feet from sea level.

Interpretation of Shloka - Brahmi is sheeta veerya or is of cold potency, sarak that means it is helpful in purgation, having bitter, astringent, and sweet in taste. It is light and good for memory retention. This herb is coolant, after digestion, it gives a sweet taste, is beneficial in gaining longevity, works as rejuvenator, is good for voice, boosts the thinking capacity, reduces skin diseases, anemic conditions, diabetes, bleeding disorders, inflammatory conditions, and helpful in reducing fever. Mandukparni has the same properties as brahmi.

Interpretation of Shloka - The swaras or juice of the mandukparni should be used. This medhya Rasayana is used to gain longevity of life, destroys all the doshas, strengthens the body, enhances the digestive fire, complexion and voice may be improved by its usage, and memory power can also be improved with mandukparni.

Interpretation of Shloka - Juice of the mandukparni and the paste of mandukparni leaves can be applied to the skin to reduce any type of skin disorder like acne.

Interpretation of Shloka - After proper panchakarma therapies body must be detoxified then peya, vilepi and all samsarjana kramas should be done, according to bhallatak Sevan procedure, enter into the house and after chanting one thousand smpaat mantras the juice of mandukparni herb should be added into the glass of milk and consume it.

This herb helps to balance the Kapha and Pitta dosha with the help of tikta rasa.