Sometimes people feel shy to share their problems with anyone. Shyness is the feeling of awkwardness with the people who surrounds you. People always have the doubts if they will reveal their problems then they will be judged by the other people in society. So many times people hide their problems, feelings and emotions due to society phobia. It is well said that shyness can ruin the many good opportunities in the life. Here shyness is related to sexual disorders. These days many people are suffering from the sexual disorders. 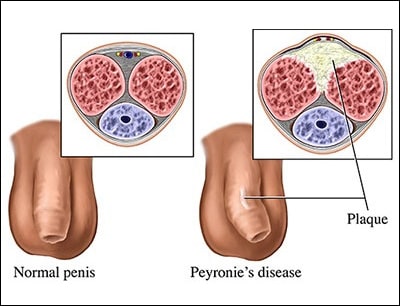 These complications have much negative impact on the personnel life like frictions in the relations of married couples. So don't feel unconformable to share the sexual disorders, go and visit your doctors they will guide you in a good way. Like other health issues sexual diseases are also curable.

Peyronie's disease was described in 1743 by a French surgeon Francois Gigot de la Peyronie. Peyronie's disease is the sexual disorder that occurs in men. This problem occurs due to the trauma or injury which results in the internal bleeding of penis. The problem occurs in young, middle aged and more common in old men. Peyronie's causes the significant pain or bends in the penis which leads to difficulty in erection during sex. It is an erectile dysfunction which also leads to stress and anxiety in men. In very few cases this problem resolves its own. But in severe cases this problem will remain for prolonged period of time. In that case it becomes mandatory to visit doctor for the treatment. Symptoms may appear gradually or overnight. You can't see the problem if penis is soft. In most cases pain get resolves over times but bend in the penis remains as a problem. Some medications have side effects which can result in peyronie disease.

HOW PEYRONIE'S DISEASE CAN BE DIAGNOSED?

A physical examination is done by the doctor who involves the measurement of penis. Doctor may also suggest the x ray to observe the presence of fibrous scars.

In severe cases, when doctor is unable to diagnose the problem then biopsy is done in which small tissue is removed from the penis area for lab testing.

It has been seen so many times that Ayurveda has conquered the many diseases whereas modern science couldn't even able to identify. Moreover allopathic medicines have the side effects on human health. On the other hand in Ayurveda it takes time to cure the disease completely and permanently. Ayurveda is considered as holistic approach for the treatment of diseases without any side effects.

As per Ayurvedic point of view imbalance of three doshas (Vata, Pitta and Kapha) are responsible for this disease. Planet Ayurveda provides effective herbal remedies such as Curcumin capsules, Kanchnaar guggul, Gandhak Rasayan, Nirgundi Oil & Jatyadi Oil for ayurvedic treatment of peyronie's disease. These herbal remedies are prepared from using best quality herbs and strictly follow the principles of Ayurveda. All these herbal remedies of Planet Ayurveda are 100 percent pure, natural and vegetarian. These are free from chemicals, additives and preservatives. These are safe to use as these are free from side effects.

Curcumin capsules are prepared from the pure extract of herb Haridra (Curcuma longa). Haridra is the most common spice used in Indian kitchens which has anti-inflammatory properties and offers the various other health benefits. It is quite effective in the treatment of Peyronie's disease and also provides the relief in the stress and anxiety associated with this problem. Herbal remedy for peyronie disease gives the pleasing results in the male who are suffering from this problem.

Dosage – 1 capsule two times in a day after meals with plain water.

Kanchnaar guggul is the amazing blend of various natural herbs like Kachnar bark (Bauhinia variegate), Amalaki (Emblica officinalis), Haritaki (Terminalia chebula), Bibhitaki (Terminalia bellerica), Ginger (Zingiber officinale), Black pepper (Piper nigrum), Pippali (Piper longum) and Varuna (Crataeva religiosa). This product is available in the form of tablets and quite effective in the treatment of peyronie disease. Herbal remedy for peyronie disease is quite effective for the males who are suffering from this problem.

Dosage – 2 tablets two times in a day after meals with plain water.

Dosage – 2 tablets two times in a day after meals with plain water.

Direction to use – It is only for local application. Massage your affected area with this oil twice daily for 15-20min.

Direction to use – It is only for local application. Massage your affected area with this oil twice daily for 15-20 min.