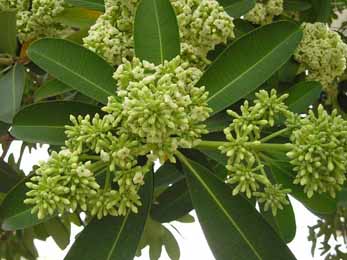 Saptaparna (Alstonia scholaris) which literally means seven leaves in a whorl, is an evergreen tree which grows up to height of 40 m. It is a glabrous tree, having green colored leaves, with glossy appearance on the upper side, while appear greyish colored on the underside of the leaves. Leaves are 4-6 inches in length, and 1-2 cm in diameter. The leaves are of uneven size but in clusters known by the name - visama- cchada and ayuk cchada.

The bark of this tree is thick, brittle, white on the external surface and yellowish inside. When the bark is cut a milky liquid oozes out. Seeds are white in color with attached to it cotton like fibers at the end.

The tree is a rich in alkaloids and flavonoids. The main chemicals of this herb are like - Ditamine, echitenine and echitamine which are used as alternatives to famous medicine - Quinine.

It is used for the treatment of disease that occurs due to tridosha. It is mainly kaphavatashamak. The tree is found to have anticancer properties. Alstonia Scholaris is a very useful herb as blood purifier, anti-bacterial, skin diseases and respiratory diseases.

The tree is native to Asian subcontinent. The tree is found widely in Sub-Himalayan tract, West Bengal, Bihar, Peninsular India and Andamans. It is also found in moderately dry places of Karnataka like Shimoga district. Besides India, it is found extensively in Pakistan, Nepal, Burma, Bangladesh, Malaysia, Indonesia, Thailand, Philippines and Australia.

It grows naturally in any type of soil including arid regions. These herbal trees bear fruits in January-February month. The flowering season is from October-November.

It balances Kapha and Vata doshas.

The drug is anti-pyretic, anti-septic, carminative, cardio tonic and vermifuge. It is used in abdominal pain, fever, respiratory disease, and in skin diseases. The drug is very much used in traditional medicine against malarial fever.

Extract of Alstonia Scholaris should never be taken in excess.