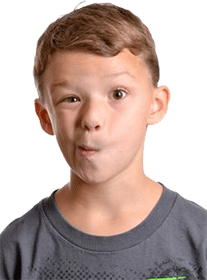 Tourette's syndrome is a complex neurological disorder that causes affected person to make sudden repetitive movements or undesirable sounds, called tics that can't be controlled. Begins between the ages of 2 and 21, and lasts throughout life. It has also been found that Tourette's syndrome is more common in boys than in girls by a ratio of five to one.

It is not degenerative and people with TS can expect to live a normal life span.

Persons with Tourette syndrome do not have much control over the unusual movements or sounds ('tics') that they make. They consist of abrupt recurrent twitches of a group of muscles. Characterized by blinking, sniffing, grimacing, shoulder movements and head movements. The exact cause of this disorder is unknown.

The causes of Tourette is exactly not known. It is likely to be caused by a combination of inherited (genetic) and environmental factors.

According to Ayurveda Tourette syndrome is due to the aggravation Vata Dosha. A sub type of vata- prana vata is mainly responsible for this syndrome.

Symptoms and Signs of Tourette Syndrome

Symptoms of TS can vary from one individual to another. The hallmark symptom of TS is tics. For tics to be defined as Tourette's syndrome, that must be present for at least a year and comprises of at least one vocal tic.

Tics are involuntary and usually sudden, rapid and repetitive muscle movements and vocal sounds that some people make, without being aware of it. People with Tourette syndrome do not characterize same symptoms.

Tics worsen with stress, anxiety, excitement, anger or fatigue and can get better during absorbing activities or sleep. The more severe ones can be embarrassing and can affect your social life or work.

Associated conditions have been reported in half of the children with Tourette's syndrome. The most common are attention deficit hyperactivity disorder (ADHD) and obsessive compulsive disorder (OCD)

Stress Support is a formulation of some Ayurvedic herbs that works in a synergistic manner to relieve stress naturally and their extract is used in making these capsules. It is helpful in maintaining a healthy mind and body. These capsules do not induce sleep.

This herbal formulation is obtained from the extract of herb Brahmi (Bacopa monnieri). These capsules have found to be beneficial to improve intellect, memory, and particularly retention power. Also supportive in other ailments like vertigo, anxiety, stress, blood pressure. It is a very potent nervine tonic and is anti-anxiety agent.

Brahmi (Bacopa monnieri): This is a wonderful herb useful in increasing memory naturally. It nourishes the neurons, it improves retention ability. It increases grasping power, learning capability and has stress relieving effect.

Ashwagandha capsule is a herbal medicine which provides relief in fatigue, stress, anxiety, palpitation, ageing, nervous breakdown. Its regular use can bring the strength back to muscles by relieving the muscles and calms down the system. It's a type of nerve tonic, energizes the physical as well as mental strength. It can be given to growing children, as well as to old age people. Supportive in relieving the Symptoms of TS.

This Ayurveda herbal is helpful in maintaining healthy brain and also balances psychic energies (Satva, Rajas and Tamas) in body. Effective product for depression and stress. This product is prepared from pure and standardized extract of Gotu kola (Centella asiatica):

Gotu kola (Centella asiatica): The natural herb has use in boosting memory, managing concentration as well as to manage acidity that occurs due to stress and depression. The herb is helpful in preventing nervous exhaustion and calms down the nervous system. Thereby helps with stress management as well. Helpful in managing the symptoms of Tourette syndrome.

Neuroplan syrup is a polyherbal formulation prepared using herbs like brahmi (Bacopa monnieri), Mandookparni (Centella asiatica), Jyotishmati (Celastrus paniculatus), Shankhpushpi (Convolvulus pluricaulis) and various other herbs. The above-mentioned herbs are considered as medhya (nervine tonic) as per classical texts which has a calming and relaxing effect on the brain. This syrup preparation manages symptoms like Eyes Blinking, Shoulder rotation or elevation, Head and arm jerking, Lip contraction, Closing of the eyes, Eyes rolling in the orbits, Turning the neck to one side (torticollis), Opening and Closing Of The Mouth and Contractions of abdomen etc by improving the coordination between the nerves, thus alleviates Tourette's syndrome.

Dose: 2 tsp twice a day, after the meals.