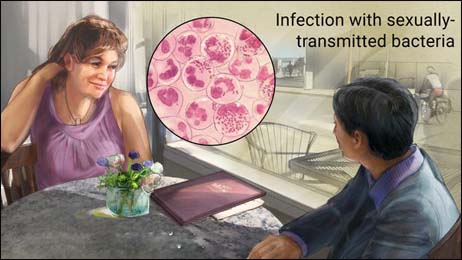 Gonorrhea is a common sexually transmitted diseases (STDs) infection caused by bacterium Neisseria gonorrhoeae that is transmitted by sexual contact. It infects both male and female, where areas most often affected are mucus lining of genitals, rectum, and throat, especially among young people ages 15-24 years.

Babies can also be infected during childbirth in case their mother is infected and most commonly infect the eyes. Also known as 'clap' or drip.

Gonorrhea is a communicable disease that is caused by bacterium Neisseria gonorrhoeae, a bacterium that can grow and reproduce easily in mucus membranes of the body and cannot survive outside the body for more than a few seconds or minutes.

Gonorrhea bacteria can stay alive only in the warm, moist areas of the body, including the urethra (tube that carries urine out of the body), female reproductive tract (the fallopian tubes, uterus, and cervix) and other sites are throat and eyes.

Gonorrhea is highly contagious disease therefore it can be transmitted from one individual to another, in case one happens to get in contact with infected semen or infected discharge from the vagina, throat or rectum.

Symptoms usually develops and start appearing anywhere from 1-14 days following exposure to the infection, but it may take up to 30 days also. It is fairly common for gonorrhea to cause no symptoms, especially in women. Men and women experience some differing symptoms which include

Symptoms in Men develop from mild to severe form:

Symptoms in Women may not develop, but even if they have symptoms that might be mild or mistaken to be other infections like bladder or vaginal infections:

It is one of the best herbal formulation with anti-inflammatory, antibacterial and anti-infection property. It also supports to relieve pain with ease. Navkarshik Churna is herbal combination of various herbs which work synergistically.

This herbal formulation is useful in diseases like ringworm, scabies, itching and other fungal infections. It manages to maintain the health of the female reproductive system. It contains Shuddh Gandhak.

Shuddh Gandhak (Sulphur (purified) - This element is a good rejuvenator, removes toxins out of the body and relieves the symptoms of infection

This herbal product is beneficial supplement to maintain health, as it is an antioxidant and immunity modulator. It supports to relieve skin irritation, skin itching, skin inflammation etc.

Neem (Azadirachta Indica) - Useful as a tonic and promotes wound healing and detoxifier. Possesses properties like being anti-bacterial, and anti-viral agent. It is useful in gonorrhea

Dose: 1 Capsule 2 times a day, after meals, with plain water.

Curcumin Capsules are wonderful formulation of planet ayurveda and very useful to manage the problem of gonorrhea. These capsules are prepared from the pure extracts of herb Haridra (Curcuma longa) which is packed with antimicrobial properties.

Dose: 1 Capsule 2 times a day, after meals, with plain water.