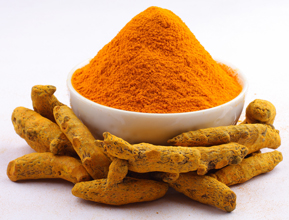 Turmeric (Curcuma longa) is perennial herbaceous plant that grows up to 1mt in height. Leaves of this plant are alternate, smooth, green, tapering at both ends and arranged in the pair of two. Leaves are further divided in leaf sheath, leaf blade and petiole. A false stem is arising from the leaf sheath and leaves are about 2 feet in length. This plant produces highly branched, yellow to orange colored, cylindrical and very aromatic rhizomes. Flowering season of the plant is usually month of august and plant produces hermaphrodite flowers. Flowers are dull yellow in color and arranged in the pair of five.

Turmeric is used in Asia from thousand years back. Initially it was used as dye later it became famous for its medicinal uses. In Ayurveda this miraculous herb is known for its medicinal values and used to prepare various medicines. Mostly this herb is used in the form of rhizome powder and pure extract of this herb is used in various ayurvedic preprations. In Ayurveda used this wonderful herb to cure internal disorders such as indigestion, common cold and various liver associated disorders. Externally it is used in wound healing and various skin related disorders.

This herb is very popular in Indian wedding ceremonies and religious ceremonies. Haldi ceremony is very important part of weddings in Hindu tradition. In this tradition turmeric paste is applied on bodies of couples and its benefit is to soften the skin and to protect booth bride and groom from bad evils. In Tamil Nadu during the festival of pongal these rhizomes are used in the worship of sun god i.e. God Surya. It is a poor fabric dye and used to dye the clothes. It is also used in Indian cuisines, pickles, curries, salads and also used to preserve canned food.

Turmeric is mainly native to India. It is also found in tropical regions of Africa and also cultivated in China, Indonesia, Thailand, and Cambodia, Philippines, Malaysia, Madagascar and Vietnam.

It balances all three doshas in body i.e. vata, pitta and kapha.

It states that haridra, kanchani, peeta, nishakhya, varvarini, krimghni, haldi, yoshitripya and hatvilasini all are synonyms of curcuma. This herb is pungent and bitter in taste, rough, hot in potency and used to pacify kapha and pitta dosha. It is used to improve skin tone and used in skin disorders, diabetes, bleeding disorders, inflammation, and anemia and used in wound healing.

Curcumin Capsules are natural herbal supplement available at house of planet Ayurveda in which pure curcumin is used. Curcumin is active biological compound of turmeric. It is very effective herb for curing digestive disorders and skin aliments. This formulation is also used in the treatment of cancer. Its regular intake is used to reduce extra toxins and used to protect free radicals from body. It is anti-inflammatory and anti-septic in nature.