What are the Uses and Benefits of Hydrastis Canadensis (Goldenseal)? 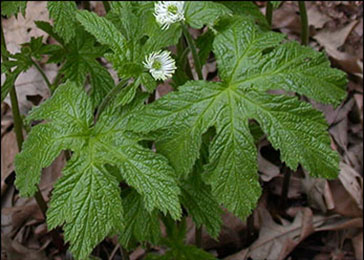 Hydrastis Canadensis (Goldenseal) is a perennial herb belonging to the family, Ranunculaceae. It is native to South- Eastern Canada and the Eastern United States.

This plant provides various health benefits. It is commonly used for the treatment of infective disorders, heart diseases and cancer.

It is a perennial herb. The stem bear one to three leaves which arise from a creepy rhizome. White flowers appear above the leaves, which later develop in small red fruits. The rhizomes are twisted, yellow and brown in color and wrinkled. It grows in rich shady soil and also cultivated in farms. The flowers of Hydrastis Canadensis (Goldenseal) is said to be bloom in April month.

It is very hard to cultivate, the Hydrastis Canadensis (Goldenseal) needs a humus-rich, well-drained moist soil, preferably in woodland.

Rhizome and dried roots of the plant are used for medicinal purpose.

Hydrastine is known to contract the blood vessels and increase blood pressure while berberine kills bacteria and promote the Immune system.

Therapeutic Use of Hydrastis Canadensis

This herb possesses strong antibacterial properties. The antibacterial property of Hydrastis Canadensis is due to the presence of alkaloids (berberine, hydrastine, and canadine) in it. This herb can help in the treatment and inhibition of bacterial infections in the gastrointestinal system, respiratory tract, skin, and the urinary system. It produces an astringent effect on the mucous membranes and reduces inflammation. It also acts as an antiseptic to treat wound infection.

This herb stimulates the functions of the immune system and promotes the ability of the immune cells to recognize and kill the organisms which are responsible for causing infections.

Hydrastis Canadensis (Goldenseal) may be beneficial for the treatment and prevention of cancer. It helps to reduce the abnormal growth of cancer cells.Thus preventing the condition from worsening.It also acts as an antioxidant and protects the normal cells from damage caused by free radicals. It is effective against various types of cancer including the prostate, colon, breast, esophageal, and pancreatic cancers.

Hydrastis Canadensis (Goldenseal) can be used as a natural therapy for heart patients especially suffering from arrhythmias. It can support heart functions and regulate heart rate. It can also provide relief from the symptoms such as palpitations, and increased sweating which is associated with arrhythmias.

Berberine and its derivatives help to improve the functions of the heart.

Hydrastis Canadensis (Goldenseal) helps to improve digestion. It provides relief from stomach upset. It is also known as a natural antibiotic and used in combination with Echinacea to boost the immune system. It also works as an antibacterial agent.

This herb is used to treat the cold, flu or hay fever. It produces an astringent effect and reduces inflammation. It is also useful in treating the sore throat.

The rhizome of this herb improves blood circulation. So, it is useful for treating piles, varicose veins and edema.

The alkaloids in goldenseal are toxic at high doses. So, never take more than 2 grams a day. Do not use regularly for more than three weeks and take a break of two weeks between courses.

Side Effects of Hydrastis Canadensis (Goldenseal)