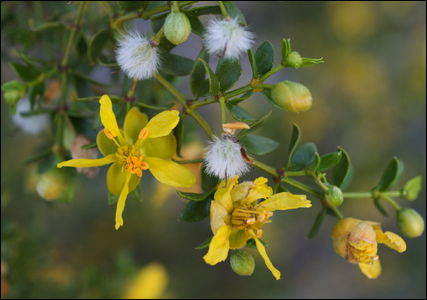 Larrea Tridentata is a group of closely related wild shrubs. It has a number of other common names. As a plant known as "creosote bush" and "greasewood", as a medicinal herb known as "chaparral" and as "gobernadora" in Mexico.

It is an evergreen shrub growing to 1 to 3 m tall, rarely reach to 4 m (13 ft). The stems of the plant consist sticky, dark green leaves with two opposite lanceolate leaflets which are joined at the base, with a deciduous apex between them. Each leaflet 7 to 18 mm long and 4 to 8.5 mm thick. The flowers consist five yellow petals and grow up to 25 mm in diameter. The whole plant exhibits a unique odor of creosote (a brownish oily liquid) due to this it has a common name as Creosote bush. Its smell resembles the same as "smell of rain".

Distribution: Larrea Tridentata grows in desert regions, including those of the southwestern United States, South America, and northern Mexico.

The main constitute of Larrea Tridentata is nordihydroguaiaretic acid (NDGA), which is medically beneficial. NDGA bears antioxidant and anticancer properties and may be useful in the treatment of various illnesses involving different systems of your body such as cardiovascular system, immune system, nervous system.

Larrea Tridentata consist of antioxidant property that help to prevent disease by decreasing the free radical level in the body. It protects blood vessels and arteries from the damage caused by high cholesterol level, atherosclerosis, high blood pressure, diabetes, and other causes.

Research suggests this plant helps to treat cancer and viral diseases as it contains nordihydroguaiaretic acid (NDGA). This anticancer property, helps to treat several types of cancer including, breast, esophageal, prostate, lung, and skin cancer. It may slow down the growth of cancerous cells and tumor. It enhances some treatments and minimizes the negative side effects of chemotherapy on healthy cells.

NDGA (nordihydroguaiaretic acid) is a natural antioxidant which helps to reduce the endothelium and vasocontractility which is induced by HIV protease inhibitor ritonavir (RTV) in the porcine pulmonary arteries. NDGA restricts RTV action and inhibits superoxide anion production in Human Pulmonary Artery Endothelial Cells (HPAEC) and pulmonary arteries. This shows that the use of NDGA is useful in patients of HIV.

The appropriate dose of LarreaTridentata depends on several factors such as patient's age, health, and several other conditions. So it is better to consult the doctor, pharmacist or health care provider who is familiar to this herb.