Severe headache in a part of the head is known as migraine. It is a common condition which may or may not be due to an underlying disease. It lasts for a few hours and may not come back for months. It is triggered by lights, sounds and certain medications. Some women may experience migraine as a part of premenstrual symptoms i.e. discomfort just before the onset of their monthly period. Yoga intervention can ease an ongoing migraine attack and also control the severity of future ones. This article describes migraine, its causes and how yoga practices can be helpful in dealing with migraine episodes. 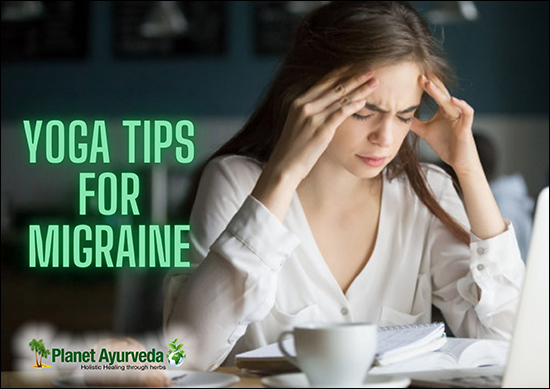 Migraine is a condition of the nervous system whose most commonly known symptom is a headache in any part of the head. Migraine is thought to be just a headache but some people have a variety of symptoms accompanying a migraine, making it serious and causing far more discomfort than an ordinary headache. There can be surprising physical features that a migraine brings with it, such as visual appearances of light flashes and dark or bright spots in the view of the person. The occurrence of an episode of migraine is sometimes called an attack. A migraine attack makes a person unable to do any reading, cooking, driving, cleaning, etc. and all regular activities. An attack may last for a few minutes to a few hours. Sometimes migraines can be triggered or worsened by strong smells, loud noise and peculiar sounds.

Various factors contribute to the development of any condition in an individual. Those could originate from one’s lifestyle or routine, or be triggered by their anatomical and physiological constitution. On this basis we see causes of a disease as lifestyle factors or physical factors. Also, some factors decide the severity and susceptibility of a condition affecting a particular individual. Those factors are known as risk factors.

Migraines can themselves lead to some conditions, or they may signal that some other conditions are developing in the body, such as:

Although there is no permanent cure for migraine, which is why we say that prevention is better than cure. But individuals with a history of migraines respond positively towards therapy. Some yoga practices that are specifically relaxing and beneficial for easing migraines and their symptoms are mentioned below. These practices improve controlled blood flow in the brain and therefore ease migraines. These should be performed on an empty stomach, or at a gap of at least three hours after a medium sized meal.

Adapting a lifestyle that cuts out the physical factors contributing to worsening of any condition multiplies the benefits of a yoga routine by several times. The following tips are extremely beneficial for everyone with any or all symptoms of all kinds of migraines.

Migraine is not a disease but just a condition that responds well to therapy. It is better prevented than cured. However, ongoing attacks of migraines can also be effectively eased with some yoga practices. Such practices have been described in this article along with those that can strengthen the nervous system so that future migraines are reduced in number as well as intensity. The practices described here are generally safe for all individuals. However, those with multiple conditions and pregnant women should begin any regime after due consultation with a competent yoga therapist. The lifestyle modifications given here should be followed strictly since a treatment is effective only when combined therapy is given with all components – diet, exercise and routine.
Share On