Aching All Over Body: Is It Fibromyalgia? 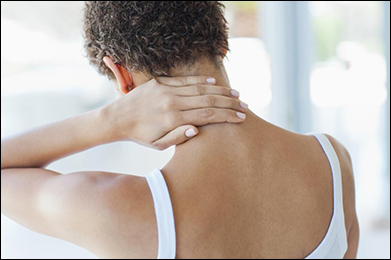 Fibromyalgia is a chronic or long-term disorder which is typically characterized by pain all over the body, fatigue, depression, altered memory and sleep disturbance. The condition is commonly associated with widespread pain in the muscles/ bones and the areas of tenderness, along with a general feeling of tiredness.

Fibromyalgia chiefly targets soft tissues and muscles in body. The occurrence of Fibromyalgia is considerably more among women as compared to men. The condition may occur at any time from childhood, though it usually occurs in the first half of a person’s life.

Fibromyalgia is also called Fibromyalgia Syndrome (FMS). Previously, some other terms like Fibrositis and Muscular Rheumatism were used for describing this condition, which may even sometimes be misdiagnosed as degenerative joint disease.

The diagnosis of Fibromyalgia, without any medical tests, mainly involves a check of the ‘trigger points’ in different parts of the body. Some of the common trigger points which are pressed by doctors to affirm pain and tenderness are:-

Doctors do not know the exact cause of  Fibromyalgia. However, it is believed that the main factors that can lead to the condition include :-

According to some theories, the chronic widespread body ache related to Fibromyalgia is probably a result of a lowered pain threshold by the brain because of which a condition that was not painful previously becomes extremely painful over a period of time. It is also suggested that, in people suffering from Fibromyalgia, the nerves and receptors in the body become more sensitive to stimulation, due to which they overreact to pain signals and cause excessive body pain.

The main symptom of Fibromyalgia is consistent dull pain linked to identified 'trigger points' affecting most of the body parts. In addition to body pain, some of the other symptoms are :-

Fibromyalgia: How is it different from other causes of body ache?

Fibromyalgia involves the nervous system, but it is different from Multiple Sclerosis (MS) which is also a neurological condition that causes chronic symptoms such as body ache and fatigue.

Fibromyalgia is a complex condition which affects most of the functions of the body, and is marked by persistent pain and tenderness in the muscles and joints. However, Multiple Sclerosis is an autoimmune disorder in which 'myelin' the protective coating of the nerves gets damaged when the immune system attacks the central nervous system.

Fibromyalgia may often be difficult to diagnose because body ache and other symptoms of the condition can mimic not only Multiple Sclerosis but also a number of other disorders.

Some of the disorders which have symptoms resembling those of Fibromyalgia include Rheumatoid Arthritis, Lupus, Lyme disease, Neuromyelitis optica spectrum disorder, chronic migraine, Sarcoidosis, Myasthenia Gravis and Sjogren’s syndrome.

In Ayurveda, Fibromyalgia is a 'tridoshic' disease. It falls into the 'Vatavyadhi' sub-type of diseases, but with Paitaja and Kaphaja involvement and variations. The Vatavyadhi category of diseases refer to chronic disorders which are mainly caused due to the vitiation of the Vata dosha in the body. These disorders largely involve the nervous system and musculoskeletal system, with additional tissues affected over time.

Ayurvedic texts have elaborated that Vatavyadhi diseases like Fibromyalgia manifest with several changing signs and symptoms such as pain, mental disturbance, fatigue, contracture, stiffness and gradual loss of movement.

There is no specific cure for Fibromyalgiain conventional system of medicine. Hence, the management of the condition in mainly focused on alleviating the symptoms, preventing disability in patients and improving their quality of life. This objective of Fibromyalgia management is achieved with the help of medications, self-care techniques, dietary and lifestyle changes.

More specifically, the dietary changes, which Fibromyalgia patients should make for managing the condition, are: increased intake of fruits and vegetables, drinking plenty of water, reduced consumption of meats and reduced intake of sugar. It is also important to eat meals at proper time and eat light, vegetarian food to protect gastric fire and avoid the production of toxins. Moreover, incompatible food combinations like fish and milk or milk and jaggery should be avoided.

Along with these dietary changes, the use of certain time-tested herbs can also be very beneficial in the management of Fibromyalgia. These herbs include Ashwagandha (Withania somnifera), Shatavari (Asparagus racemosus), Bala(Sida cordifolia), Ginger (Zinger officinale) and Cumin (Cuminum cyminum).

The different treatment options for the management of Fibromyalgia can alleviate some of symptoms and make it easier for the patients to deal with the condition. If body ache and other symptoms of Fibromyalgia persist for months in spite of dietary/lifestyle changes, self-care and other therapies, it is advisable to consult a medical practitioner or Ayurveda expert for more specific recommendations to manage the condition.