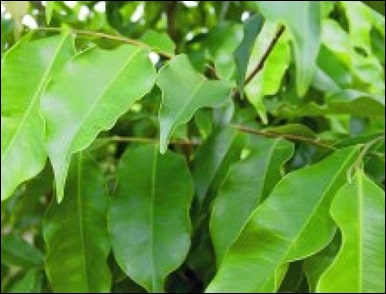 Description of the Plant

This is a big tree growing up to 60 to 80 feet and with thick stem of 3 to 4 ft in diameter. It is native to South East Asia. The bark is papery thin and was sometimes used for writing like Betula utilis tree bark (Bhojpatra in Sanskrit). Leaves are thin like leather, shiny and up to 3 inches long. Flowers are white in color and fruit is 1 to 2 inches long, smooth and thin.

The bark sometimes gets infected with a fungus (Phaeoacremonium parasitica) in 7 to 8 % of the trees, which turns the bark from light brown to dark brown or black. This leads to a special fragrance unique to Aguru tree due to the presence of the oleoresin.

This infected part of the tree yields Agarwood oil, which is sold in various Arabian countries, China and Japan. The oil of this tree has high economic value as it is very expensive and the cost usually same as 24 carat Gold. The reason is cumbersome distillation process yielding only 30 ml oil from 100 kg of infected wood. The oil is known as Oud and is 100 % natural essential oil.

The fragrance is mainly because of various mix of sesquiterpenes and epoxides, which can also be used as pheromones to attract opposite gender.

There are about 17 species in the genus Aquilaria and 8 are known to produce Agar oil. Aquilaria agallocha is synonym for A.malaccensis, A.secundria.

Agarwood is famous for its role in making of incense sticks for various ceremonies. The wood is also used to make beautiful carvings and sculptures. In many countries of Southeast Asia, the Agarwood beads are made to keep oneself safe from evil spirits and bringing good luck.

Special Note about This Plant

Agarwood oil is obtained from the resin of the tree. The resin of the plant is called Gaharu. It is formed naturally as a result of reaction of the tree to the attack of fungus. Attacked trees spread a fragrant gum to protect the injured area, which gets hardened in the form of a resin. The hardened area contains the precious oil trapped within the Resin. This resin is processed to obtain the oil.

Habitat of the Plant

This tree is native to Southeast Asia and grows in China, Bangladesh, Bhutan, Eastern India, Thailand and Malaysia.

It balances Vata and Kapha doshas.

According to Raj Nighantu, there are 4 types of Agaru.