What are the Medicinal Properties of Cayenne Pepper (Capsicum Annuum)? 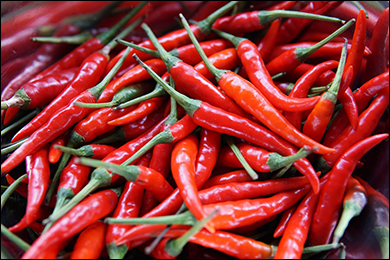 Cayenne Pepper is commonly known as chili pepper and usually used to add flavor to the dishes. It is a type of capsicum which grows 10-25cm in length. This herb is mostly red in color, skinny and has a curved tip. Its skin is rippled and hangs down from the bush. These chilies are plucked, dried and grounded into powdered form in order to use it in cooking. It is used to give the spicy flavor to the dishes while cooking. Cayenne pepper is also a renowned herbal supplement which is full of medicinal properties and used for therapeutic purposes. Although, it is called as pepper but does not come under piper genus like black pepper. Capsicum word has come from a Greek word which means "to bite".

Cayenne is a small shrub or plant which grows usually in a tropical environment. This herb can live for decades as it is a biennial or annual shrub. This herb is cultivated in northern climates like annuals. Its bright red fruit is often mistaken for the vegetable, but it's a fruit. It has an acrid and hot taste/potency. The biting and spicy taste of Cayenne pepper come from its constituent called Capsaicin. Its amount varies in every species of the herb. This fruit has a bright red color which attracts the birds that is not affected by its hot and spicy taste. Distribution of its seeds also takes place by these birds. Cayenne is very strong spice but just like other food like spice its energy is also balanced and it can be taken for a long time as food. Capsaicin present in it has analgesic property that helps to relieve the pain and treats various problems like joint pains, muscle ache and head ache. Its topical application can lead to alittle burning sensation. In cold and cough, soups containing cayenne pepper should be consumed. It helps to relieve the ailments. Its powder can help to remove toxins from the body and treats the bite of snakes and insects. Applying it on the wounded area helps to heal the injury.

Cayenne pepper is mostly used as a spice in culinary dishes to add a spicy flavor to them. It can also be used as a fomentation, oil, liniment or salve.