Sleep Apnea and Its Natural Treatment 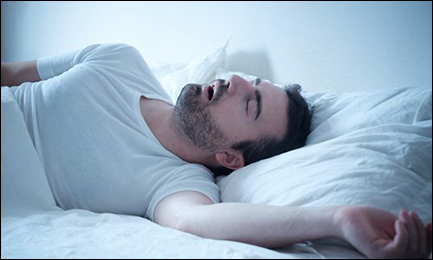 What is Sleep Apnea?

Sleep apnea is a common sleep-related breathing disorder in which the individual's breathing repeatedly stops and starts during sleep. This condition involves a decrease or complete halt in airflow despite ongoing effort to breathe. It occurs when the muscles involves during the sleep causes the collapse of soft tissue and blocks the airway.

This may lead to the partial reduction and complete pause in the breathing process that lasts for 10 seconds during sleep. Most of the pauses last between 10 to 30 seconds but some may persist for one minute or longer. There is a reduction in the blood oxygen saturation with the fall in the oxygen level as much as to 40 percent or more.

As per Ayurveda Aspect :-

According to Ayurveda, our health depends upon the three pillars (upstambha) ie., ahara, nidra and brahamaccharya. Sleep is one of the most important pillar of health associated with happiness and good health. When the mana including the indriyas is exhausted then the individual sleeps. But there are some factors that causes nidra roga. The main causative factors are increase in the rajasa and mansika dosha with the involvement of all the three doshas in the body. But the most dominating dosha is the vata dosha which is the main cause of nidra roga.

As per Modern Aspect :-

The brain responds to the lack of oxygen content by altering the body and causes brief arousal from sleep that restores the breathing process. Most of the people with sleep apnea snore loudly and frequently with periods of silence when the airflow is blocked.

This disease can occur at any age but prevalence increases between middle and old age.

Approx 24 percent of men and 9 percent of women have symptoms of sleep apnea.

According to this Shloka:

Happiness and unhappiness, proper nourishment, strength and debility, sexual powers and impotence, knowledge and ignorance, life and death-all these are dependent on sleep.

What are the Types of Sleep Apnea?

Involuntary sleepiness during the activities that mainly requires little attention such as reading or watching tv.

Involuntary sleepiness during activities that require some attention such as presentations or meetings.

Involuntary sleepiness during activities that require more attention such as driving or talking.

What are the Risk Factors for Sleep Apnea?

What are the Symptoms of Sleep Apnea?

Some Preventive Tips of Sleep Apnea

Changes in lifestyle, it includes :-

Planet Ayurveda offers natural herbal formulations such as sleep apnea care pack for the treatment of sleep apnea. For safe and effective results you can use these formulations because these are 100 % pure, natural and are free from preservatives, fillers, chemicals, colors and have no side effects.

As the name suggests "Arogya" which means good health and vardhini means improve. Hence this formulation maintains the overall health of the individual. These tablets have been used in Ayurveda since many years ago. According to Ayurveda, it balances all the three doshas of the body. This herbal formulation contains shudh gandhak, shudh parad, Loh bhasma, abharak bhasama, Tamra bhasma, Amalaki, bibhitaki, haritaki, chitrak mool, guggul, and katuki. These herbs have an anti-oxidant property that delays the process of aging. These are good for digestion, obesity, detoxification, and has various medicinal properties. Chitrak mool present in this formulation shows effective results in symptoms related to sleep apnea such as snoring.

Tulsi capsules contain pure and standardized extract of tulsi (Ocimum sanctum) and are very common to use because of its various therapeutic values. Tusli has been used in Ayurveda since many ages for the formulation of various medicines as it balances all the three doshas in the body. This herb shows effective results in autoimmune disorders, rhinitis, allergies and blocked throat conditions by boosting up the body's immune system. Problems related to sleep apnea can be easily managed with these herbal capsules.

Dosage : One capsule twice daily with water after meals with plain water.

Fenugreek capsules are formulated with the pure and standardized extract of fenugreek. These capsules balance the Vata, pitta, and kapha in the body. These capsules help to maintain the symptoms associated with sleep apnea such as mood changes, irritability, morning headache, dry mouth, etc. As fenugreek seeds contain vitamin A, B6 and C, folic acid, thiamine and niacin and other minerals like potassium, calcium, magnesium, manganese, copper, and zinc so it is very helpful in treating various disorders. These capsules prevent fatigue, weakness, excessive urination and obesity.

Dosage : One capsule twice daily with milk or plain water after meals.

Nirgundi oil is formulated with the leaves of herb nirgundi (Vitex negundo). It is prepared with the sesame seed oil and is useful in wound healing. Being the richest source of vitamin C it is one of the best antibiotic as well as an anti-inflammatory herb. According to Ayurveda, it balances the vata and Kapha dosha and is useful in treating diseases such as malaria fever, typhoid fever, worm infestation, adenitis, and dermatoses. For better and effective results use this oil daily. The other effective herbs used in it are Haridra, manjistha, and Kalahari because these herbs not only increase the actions of nirgundi oil but also make it more efficient.

Dosage : Put two drops of this oil in both the nostrils twice daily.