Coughing is one of the most common health issue. It is body's natural cleaning way to remove foreign materials from our body. Whenever our brain gets information of mucus or any other irritant in our throat or upper air passages, it immediately gives signal to our body to cough so as to remove that element as early as possible. However it protects our body but leave the chest aching as helps in clearing the large breathing passages from fluids, irritants, mucus etc. sometimes leads to aches in our upper body. Coughing can be due to hidden diseases such as allergic rhinitis, bacterial infection of upper respiratory tract, sinusitis, lung cancer, tuberculosis, asthma, pneumonia or reflex of stomach contents, viral infection, common cold, flu and smoking. Syndromes of cough includes itchy throat, chest pain and congestion. Instead of using cough syrups, one can try some natural treatments using readily available ingredients in kitchen.

Turmeric is loaded with therapeutic effect on coughs, specifically a dry cough. It is a yellow colored herb with lots of medicinal properties. It is anti-inflammatory in nature, its curcumin aids in alleviating the chest congestion that flourishes in people suffering with chronic cough. Use of volatile oil extracted from turmeric for cough is also very promising in soothing cough by getting rid of phlegm. 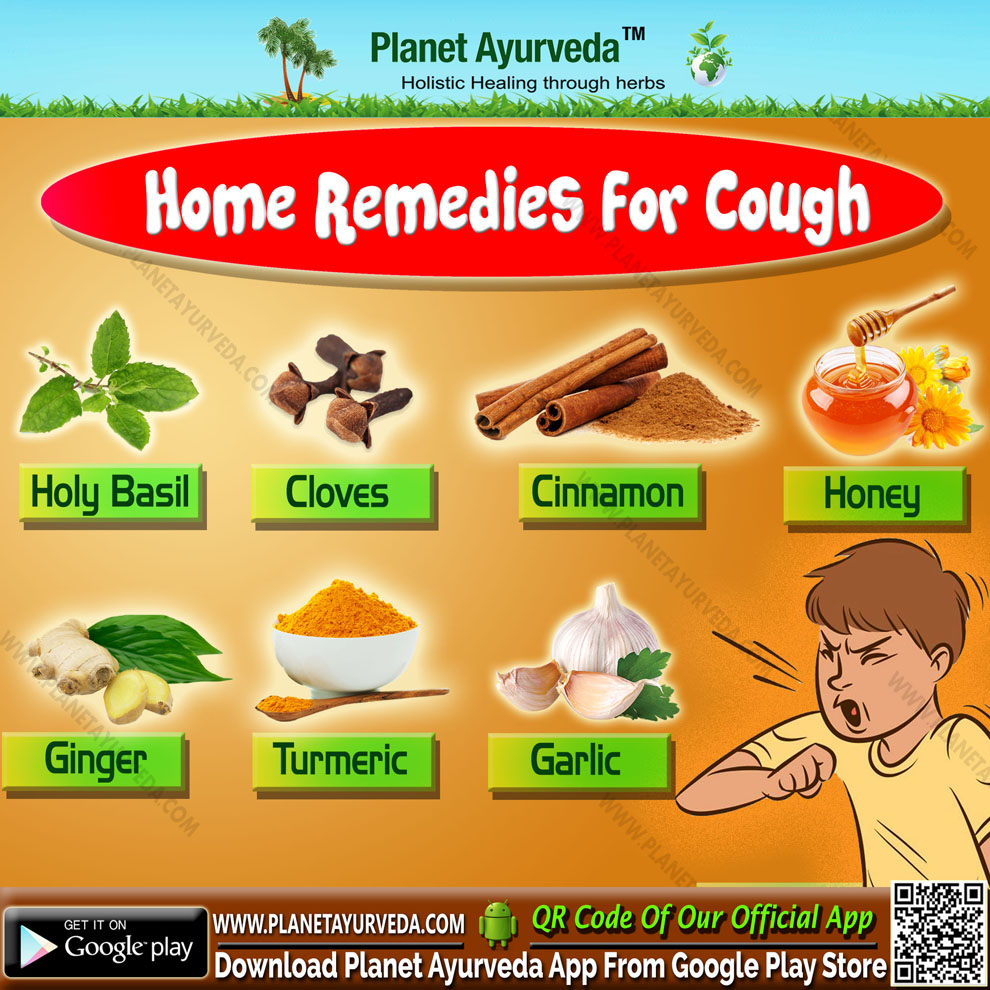 Honey appeared to be as effective as a common cough suppressant ingredient 'dextromethorphan'. Since honey is cheaper and widely available, it might be worth a try.

Garlic is known for its anti-bacterial and anti-microbial properties. It is used as a cough remedy since ages.

Note: In case of acidity problems, this remedy is not advisable.

Ginger, the most popular herb used in treating cough has lots of magical properties. Ginger bear anti-inflammatory and antimicrobial properties which kills the unhealthy bacteria. It aids to break up the congestion developed in the respiratory passages. Gingerol and zingiberene present in ginger helps to boost the immune system and even coats the esophagus to prohibit itchiness and irritation.

It is known as "Tulsi" in layman's language. It is used in multiple ways in treating impotence, poisoning, dyspnea, vomiting, coughs, halitosis, backaches, respiratory diseases and even arthritis. The ancient texts of Ayurveda illustrate multiple use of Holy Basil in treating several diseases.

Cinnamon is strong anti-inflammatory and anti-viral. It support healthy heart, healthy respiration, ignites the digestive fire and work for purifying the blood and even support healthy pancreas. It has the ability to digest Aama/toxins.

Cloves are packed with medicinal properties, has phenolic compounds such as eugenol and gallic acid, which are anti-inflammatory and anti-bacterial in nature. Cloves not only relieve a sore throat but also alleviate misery caused due to persistent coughing. It acts as a natural expectorant because of essential oil present in it, helps in clearing the respiratory passage.

Cloves also possess antibacterial properties and benefit to alleviate the pain occurred due to continuous coughing and sore throat. Cloves also helps to get rid of the itchy feeling which is common sign during dry cough.

To recapitulate, these natural remedies are very effective in cases of coughs, even mild or chronic. One must try at home to get optimum results.