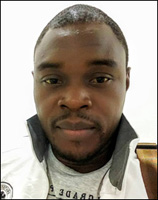 He is authorized Reseller of Planet Ayurveda in CEEAC Sub-Region (Cameroon, Gabon, Congo-Brazzaville, Congo-Kinshasa, Chad, Equatorial Guinea, Central African Republic and São Tomé and Príncipe). People from nearby locations can contact him for Planet Ayurveda products.

His Life Story and Experience

He had been feeling very much sick from the last 3 years. The symptoms were acute but were dragged on longer and longer. The more he was consuming the Allopathic medicines, the more the condition was worsening due to the chemicals which were used in preparing those medicines.

Finally, they started showing their side effects, which increased rapidly. He started feeling more tired, sleep increased, complete loss of appetite and increased weight. His eyesight was getting weaker and his condition was deteriorating overall. He was in such a bad state that nothing else could explain about his newfound depressive and unstable state beside the chemical drugs he was consuming.

Then, one day one of his friends recommended him to seriously look into alternative natural remedy to treat himself. So he started searching for the best alternative remedies for this and during his investigation, he found natural products of Ayurveda. And since he started using these natural products, everything had changed in him. He had become more spirited. His energy levels were at their best and he felt a complete 360 degrees turn around.

The Central African region (CEEAC) is beset with a proliferation of substandard drugs from very dubious origins. The governing controls are very weak. The sales and distributions of even substandard pharmaceutical drugs and out rightly falsified medicine are rampant. Thereby causing more health havoc and anguish than is tolerable.

The natural products of Planet Ayurveda and their therapeutic values have proven a boon to him, his family and the circle of his acquaintance that he felt compelled to bring them to the widest possible population.

After having a great experience with Planet Ayurveda. He gained such belief in our products that he became the Reseller of our products at Cameroon.

We use cookies to ensure that we give you the best experience on our website. If you continue to use this site we will assume that you are happy with it.I AgreePrivacy policy